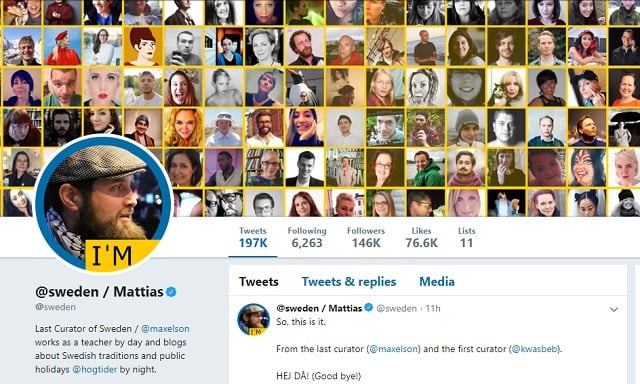 The seven-year-long 'Curators of Sweden' project attracted global attention as Sweden became the first country to allow ordinary people to take the helm of the country's social media account.

“So, this is it. From the last curator (@maxelson) and the first curator (@kwasbeb). HEJ DÅ! (Good bye!)” read the final message.

In an attached video, the first curator said: “Thank you for letting us get to know you and I'm sure we'll meet again.”

Over the seven years it's been running, 356 people ran the account, which gained over 146,000 followers around the world. The curators included both people living in Sweden and Swedes overseas, who shared information about Sweden and their own lives, and the account was labelled “the world's most democratic”.

The project was launched in December 2011 by Visit Sweden and the Swedish Institute, with the goal of increasing interest and knowledge about Sweden around the world.

The venture has been lauded by the communications industry, with awards at the international Grand Prix, the Clio Awards and two Silver Lions at Cannes Lions, among others. But there has also been controversy, including reports of rising racist and sexist abuse.

Anna Rudels, head of the department of digitalization and communication at the Swedish Institute, told The Local earlier this year that part of the reason for ending the project was to reach a more diverse group of people.

“The reason why we choose to end the concept is that its geographic reach is simply not enough. The Swedish Institute's job is to communicate with the rest of the world about Sweden and in order to succeed we need a wide reach. Today @sweden mainly reaches people in the US, UK and Sweden,” she said.