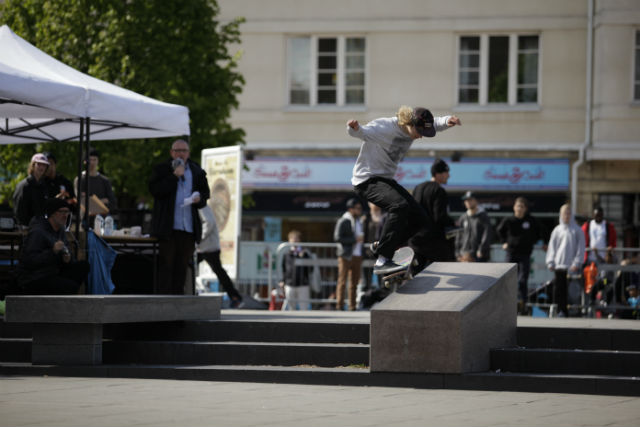 Amandus Mortensen doing a no comply to fakie 5-0 grind at Värnhemstorget at the Skate Malmö Street contest in Värnhem Square in 2016. Photo: Skate Malmö
Patrik Evander speaks up to carry his voice over the buzz, clatter and grind of wheels and boards on wood. “They're a lot better than the old guys.” He gestures at the young men perched on top of a slope at Bryggeriet, the converted brewery at the heart of Malmö's skateboarding scene.
“We didn't have a good place to skate until we built it, and by the time we did we were tired and old. That guy Fernando, he was here when he was 11, flying around the edge of the vert ramp on inline skates. He'll skate really high, skate concrete steps, skate pools. He's not afraid of anything.”
It's already after 9pm, but in less than 12 hours, many here will be back — not to skate, but to go to school. By day Bryggeriet doubles as perhaps the world's only state-funded secondary school to put skateboarding at the heart of the curriculum, with several former students, like Nike-sponsored Fernando 'Nando' Bramsmark going on to professional careers.
But this barely touches what Malmö has achieved in the 18 years since the authorities gave the keys for this building to Evander and a group of other skaters, who had previously spent their time being chased out of a nearby underground car park.
The tolerant approach has blossomed into a whole philosophy of skate-friendly urban development, branded 'Skate Malmö'. It is influencing town planners as far away as Melbourne, Australia, which in 2017 released its 'Skate Melbourne' plan, and in Hull, England, which last year set up Skate Hull while it was UK City of Culture.
“What the town of Malmö has achieved is incredible,” says Mark England, whose Rockcity skatepark worked with Hull Council on its plan. “It's leagues ahead of what everyone else is doing.”
Working together with skaters
Iain Borden, Professor of Architecture and Urban Culture at University College London, and a passionate proponent of skateboarding, calls Malmö “the most progressive city in the world today for integrating skateboarding into urban culture generally”.
The city council employs Gustav Edén, a former skate teacher at Bryggeriet, as a council officer working full time on skating, primarily in organizing the final of Vans Pro Skate Park Series at Kroksbäck skatepark.
Arguably the closet thing to skateboarding's World Cup, it was won once again this September by Malmö's own Oskar “Oski” Rozenberg Hallberg.

But Edén also works with town planners. “Skateboarding is unique in that it's so involved with the architecture and fabric of the city,” he explains. “We add skate functionality to existing spaces in order to activate them. The knock-on effects are enormous.”
Anders Dahlbäck, who in 2016 left the city government to set up his own architecture practice, dates the breakthrough to 2005, when the city let John Magnusson from Bryggeriet build a 3,000 square metre outdoor skatepark, hoping to bridge the gap between the centre and a new district built on the site of its old shipyards.
“After that the city saw that there was a real energy and momentum in that usage of the city,” Dahlbäck explains. “We've worked quite deliberately with skaters since then.”
Recently, Dahlbäck took this a step further, with a skate-friendly redesign of Nobeltorget, a square so unappealing that local café owner Christer Havung jokes wryly that “not even the junkies wanted to go there”.
Dahlbäck lined the corners of the low walls at one end of the park with galvanized steel, and added a curving ramp. “The whole geometry was made together with skaters, the lines are right for them to approach at the right angles,” he explains. Havung's takings jumped by 1,000 Swedish kronor ($111) a day when the skaters came to test the spot in September.
But skaters seemed to have abandoned the site, complaining that the paving stones are too uneven. Edén points instead to Värnhemstorget, a square which he says had become “a bit of a negative space because there were a lot of homeless people there”.
“In order to activate it again”, as Edén puts it, the city simply installed two benches and two 'hubba' ledges on a set of steps, all made out of the same red granite as the path through the square.
“Because it does't look like a skate park, the negotiation between the general public is open. It's not a designated space. The benches are there to sit on as well as skate on.”
'You want to feel part of an underground culture'
Not everyone agrees. Birmingham City Council in 2016 banned skateboarding in the city centre, putting it in the same category as al-fresco sex, street drinking, and public drug-taking. City councils are still more likely to fix metal knobs and ridges to benches to stop skaters than steel corners to make them skateable.
There is also a clash between the image of skaters as outlaw individualists and their employment as agents of civic development.
“It's not hard to see a skateboarding boycott of a city that tries too hard to make it acceptable,” Dahlbäck admits. “You want to feel part of an underground culture.”
John Dahlqvist, Bryggeriet's skate teacher, argues that, in Malmö at least this isn't happening. “To me it seems a really bad idea, but anyone who comes to Malmö would say it's got a really thriving skate scene.”
Borden suspects this might be because skaters no longer have the “countercultural, stick-two-fingers-up-to-the-modern-world attitude” he remembers from the 1990s. Perhaps in Sweden, with its high trust in public authority, they never did (although Evander remembers 'borrowing' scaffolding poles in the dead of night for his first miniramps, which later ended up here).
When The Local catches 23-year-old Fernando Bramsmark, board in hand, on his way back home, he has no complaints about the city's involvement.
“It's hard to say because you kind of have to feel it for yourself. There aren't really many cities like this. It's a really new thing.” He grins a little at his inarticulacy. “Everybody likes it. Everybody's stoked.”