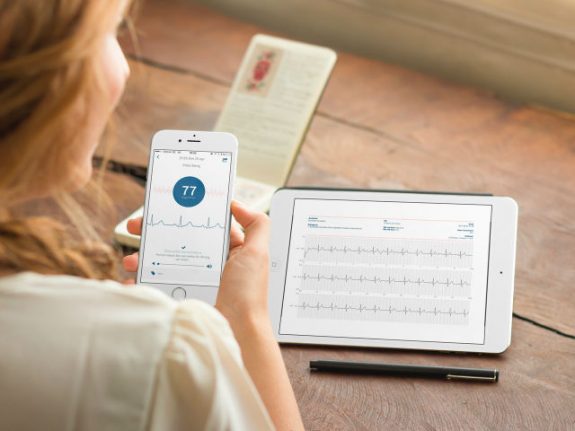 Swedes are among the healthiest people in the world and are living longer as a result. While the nation’s health service is envied around the globe, longer lifespans are increasing the strain on medical professionals.

Health tech provides people with the ability to take better care of themselves using technology and is a complement – not a threat – to existing healthcare, say the developers of Swedish success story, Coala Life.

The Coala health monitor is a device that syncs up to your smartphone to record your heart sounds and ECG in under 60 seconds. It has won rave reviews and awards as well as $12m in funding. Despite this, the founders have encountered resistance from physicians who are still too attached to the old-fashioned stethoscope.

Embracing the new opportunities provided by health tech is vital. For example, the Coala device was used by one of Sweden’s largest healthcare providers to assess patients with palpitations and arrhythmia. And the result? Specialist referrals decreased by 40 percent.

Find out more about investment opportunities in Stockholm

Health Tech is here for the long-term and is state sponsored in Sweden where the government has pledged to become global leaders in e-health by 2025. With national backing, health tech is now big business that is attractive to investors both in Sweden and further afield.

“Stockholm is really the center point of the fast moving digital health hurricane that is working to transform healthcare. We’ve had great success in attracting local funding as well as a world-class team including hardware-developers, designers, clinicians and go-to-market champions. Many countries and companies follow the trends, innovations and best-practices that arise out of Stockholm, and I’m proud that Coala Life is one of the key contributors of this unique ecosystem,” says Philip Siberg, CEO of Coala Life (pictured right).

Stockholm, which was christened ‘the unicorn factory’ by the Financial Times back in 2015, earned that moniker for being home to multiple companies that are valued at more than $1bn. And with the health tech industry growing at a rapid speed in the city, it is attracting interest as well as investment from overseas.

Take Swedish-based company Bonzun for example. Since being founded in 2012, the virtual midwife app, which provides free expert advice for expectant parents, has gained a significant foothold in China where 82 percent of wealthy Chinese people do not have a GP. Photo: My Pregnancy App by Bonzun

Bonzun has proven to be a hit among Chinese women; its My Pregnancy app has been downloaded millions of times in China since it was rolled out in 2012. China’s e-health market was valued at $2bn in 2017, and Bonzun’s CEO and Founder, Bonnie Roupé, is keen to increase her company’s presence there. Thinking big is the way to go says the Swede.

“In Sweden there are 120,000 pregnant women a year. In China it is 22 million. We see that there is a gap in the market everywhere for the service we offer. Although maternal care is different in other countries, the questions that pregnant women have are the same,” says Roupé.

Roupé has big ambitions for her app, which is already available in English, Swedish and Chinese, with other languages in the pipeline. Stockholm is the ideal starting point for pioneering advances in health tech, she says.

“In Sweden we have reached a level of comfort in terms of free access to healthcare that we are able to create ideas for how to improve it. Stockholm has people from all different backgrounds working together to create new technology.”

Find out more about investment opportunities in Stockholm

Prosilico is a medtech firm with its origins in Stockholm. The firm has developed a unique AI-based in-silico prediction methodology platform that is used in the pharmacokinetics sector. The service has been successful in Scandinavia and the founders, two ex-AstraZeneca researchers, are keen to expand abroad and get a piece of the global market, which grows 10 percent annually and attracts backing from pharmaceutical giants.

“We are the first company to objectively demonstrate that it is possible to predict human clinical pharmacokinetics of drug molecules directly from chemical structure just as accurately as is done in the laboratory,” says Urban Fagerholm, CEO of Prosilico

He adds, “What we are doing is a paradigm shift away from the traditional methods such as animal testing and narrow-range test tube-studies for this kind of research. Our validated technology has great potential since it is faster and more cost-efficient than going to a lab, and gives our customers ethical advantages and an opportunity to get reliable data and to optimize at the drug design stage.”

The firm collaborates with a drug discovery company in Spain and will soon launch a unique, validated web-based prediction platform.

Stockholm is of course home to the world famous Karolinska Institutet, which has a long history of producing doctors and researchers. Neighbouring city Uppsala also enjoys a similar reputation. Such deep resources of knowledge and expertise in the region make Stockholm an obvious hub for the burgeoning health tech sectors, says Fagerholm.

“The Stockholm region, with many former AstraZeneca scientists and top-ranked universities, is a natural place for research within this field.”

Even in a country with a world-class health service such as Sweden, it can still sometimes take a while to get an appointment with your GP and even longer to meet a specialist. Many Swedes live in rural locations that are many miles away from their local healthcare centre, which can make it problematic to see your doctor at short notice. Fortunately, Sweden has broad internet penetration across the country; 94% of the population are online. The developers of MediCheck have been quick to spot that Swedes are both health and web savvy. MediCheck users can consult with specialist doctors via video calls or instant messaging simply by using their smartphone, tablet or computer.

With multi-lingual specialists from all fields of medicine, MediCheck is shaking up the traditional doctor/patient relationship by making it virtual and more accessible.

“By providing access to the right specialist and virtual specialist teams we empower the patient’s ability to control their personal wellbeing where ever they live. If you, for instance, suffer from arrhythmia, we can help you manage your disease by monitoring your heart with a Coala and at the same time give specialist advice based on your history and Coala data,” says Christian Tärnholm, CMO of MediCheck.

He adds, “Stockholm is a great place to be as a young company. The start-up community in Stockholm is really supportive and there are several good incubators and acceleration programs from players like Sting, Connect, SUP46 and more.”

This article was produced by The Local Client Studio in partnership with Invest Stockholm.

In a new recommendation, the agency said that those living in elderly care centres, and those above the age of 80 should from March 1st receive two vaccinations a year, with a six month gap between doses.

“Elderly people develop a somewhat worse immune defence after vaccination and immunity wanes faster than among young and healthy people,” the agency said. “That means that elderly people have a greater need of booster doses than younger ones. The Swedish Public Health Agency considers, based on the current knowledge, that it will be important even going into the future to have booster doses for the elderly and people in risk groups.”

People between the ages of 65 and 79 years old and young people with risk factors, such as obesity, diabetes, poor kidney function or high blood pressure, are recommended to take one additional dose per year.

The new vaccination recommendation, which will start to apply from March 1st next year, is only for 2023, Johanna Rubin, the investigator in the agency’s vaccination programme unit, explained.

She said too much was still unclear about how long protection from vaccination lasted to institute a permanent programme.

“This recommendation applies to 2023. There is not really an abundance of data on how long protection lasts after a booster dose, of course, but this is what we can say for now,” she told the TT newswire.

It was likely, however, that elderly people would end up being given an annual dose to protect them from any new variants, as has long been the case with influenza.