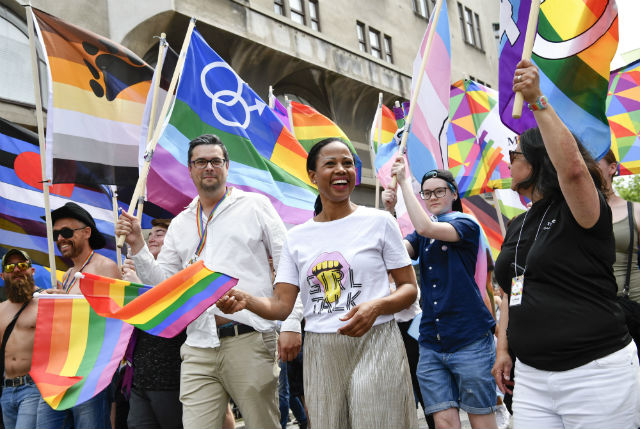 Filip Filipek marches alongside culture minister Alice Bah Kuhnke during Malmö's 2017 celebrations. Photo: Johan Nilsson/TT
Malmö mayor Katrin Stjernfeldt Jammeh announced on Thursday that the city's executive committee had appointed the accounting firm PWC to look into the organization's affairs, before the city will transfer the 40 million kronor ($4.4m) in funding it has agreed to provide for the 2021 World Pride celebrations, which are being held in Copenhagen and Malmö.
“My feeling, and in this we are agreed across political divides, is that it is extremely inappropriate,” Stjernfeldt Jammeh told the Sydsvenskan newspaper of the controversial arrangement. “The idea is not that the money should go to individuals. What is problematic is that he is both employed and employer.”
READ ALSO: Malmö to share hosting duties of World Pride 2021
Filipek is both the Chairman of Malmö Pride, a voluntary group, and employed by it as the Pride General organizing the 2021 event.
According to the newspaper, the employment contract he agreed with the board he chairs gives him one percent of all funding secured for Malmö Pride.
“It was a decision which was taken in 2016 when I was employed, because it is my responsibility to hunt down sponsors and income for the organization,” Filipek told Sydsvenskan when the story first broke last week.
READ ALSO: Malmö is Sweden's 'gay heart that pumps love'
The trigger was the resignation of Edith Escobar, the group's vice chair, which followed four other members of the group's board, all of whom have left since the group's annual meeting in March.
Filipek initially denied that the one percent commission on funding included grants from public bodies.
But Sydsvenskan provided him with an email he had sent to his colleagues in which he listed grants from Malmö Tourism, Region Skåne and Malmö Stad, all of which he said would go towards the 13,515 kronor bonus he received as a bonus in January.
The bonus came on top of a monthly salary of 35,000 kronor.