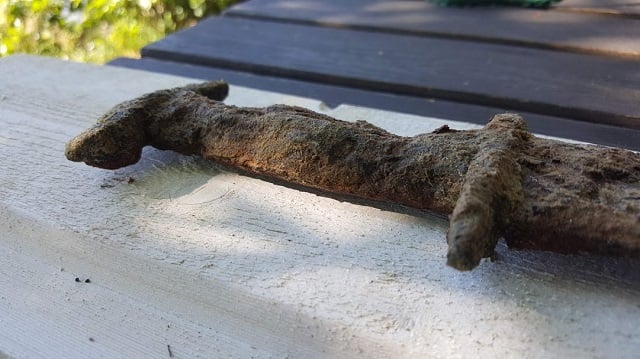 The sword is estimated to be 1,500 years old. Photo: Andrew Vanecek

In Sweden, many online followers wondered if this was a way to break Sweden's political deadlock (the country is in the process of trying to form a government after an inconclusive September 9th election).

Ah, finally an end to our post-election limbo. Tell the political parties someone else has been chosen by fate to form a government. #Sweden https://t.co/RIlNZwjd2t

Some went further and suggested she should rule the whole planet.

Well that’s it then, she’s the new ruler of earth. We all must pledge our fealty https://t.co/HOaRgUcqtr In general, people seemed quite happy to accept Saga Vanecek as their leader.

It was a good opportunity for a Monty Python reference…

'Listen. Strange women lying in ponds distributing swords is no basis for a system of government. Supreme executive power derives from a mandate from the masses, not from some farcical aquatic ceremony.' https://t.co/T9Ns4wXuzE

… as well as Harry Potter

Be honest @jk_rowling: This is the Sword of Gryffindor, isn’t it? https://t.co/Xa5Gygy11g

Tweeters marvelled at Saga's name, which means 'the seeing one' in Norse, and is used to refer to epic legends about heroic struggles in both Swedish and English.

She will get a saga written about her, The saga of Saga.

Some commenters said it was an extremely 'Swedish' tale (here's the herring and elk story referred to).

Ok, this story may be even more quintessentially Swedish than the herring and elk story. #Sweden https://t.co/gW1Q8QFS1Y

Others drew comparisons with a seven-year-old schoolgirl who found a sword in a lake in Cornwall, England last year. In that case, the sword was believed to be a toy or film prop, whereas the relic discovered by Saga is estimated by museum experts who spoke to The Local to date back to the 5th or 6th century AD:

She and the British girl who pulled a sword out of a pond in the UK a while back need to have a summit meeting post-haste.

As for Saga herself, when The Local asked her how she felt about the huge reaction to her discovery, she said it was “cool”, but that she hopes to become a doctor, vet, or actress.

Read The Local's interview with Saga and her dad HERE