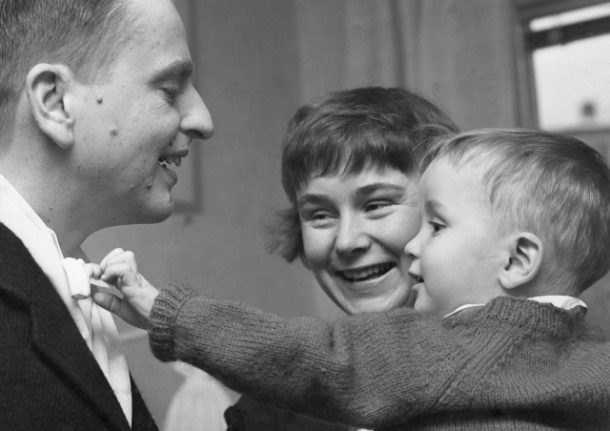 Lisbet Palme with her husband Olof and son Joakim in 1963. Photo: Jonny Graaf/Expressen/TT

Her family said she had died after a period of illness, reported the TT news agency on Thursday.

Mr Palme did not have a bodyguard with him on the night he and Mrs Palme were walking along the busy Sveavägen after a spontaneous trip to a downtown Stockholm cinema on February 28th, 1986.

A gunman came up from behind and shot him twice in the back. Mrs Palme was also grazed by a bullet. She later identified Christer Pettersson as the shooter in a line-up, but he was acquitted by an appeals court.

The murder sent shockwaves through Sweden and a killer was never convicted, nor was the gun found.

Mr and Mrs Palme had three children together, Mårten, Joakim and Mattias.

“I had many great conversations with Lisbeth Palme, most often in Gotland and in connection with speeches at Almedalen,” said Löfven in a statement, referring to the political festival founded by Mr Palme and often informally called 'Palmedalen'.

Löfven also highlighted Mrs Palme's long-term work with children's rights, including her role as chair of the Swedish Unicef Committee, and said that the best way to honour her memory was “to continue this work with as much energy as possible”.