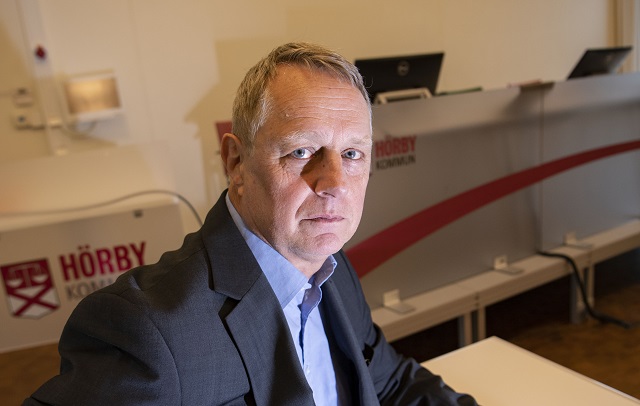 “The media attention that has been directed at my person has made in impossible for the party in (Skåne town) Hörby to instead focus on what's important: Hörby's future and the policies we want to pursue for the municipality,” Borg said in a statement on Monday.

Anti-racism magazine Expo investigated Borg's activity on social media, and found he had shared extremist far-right and anti-Semitic content, as well as making homophobic statements including comparing LGBT people to necrophiliacs and paedophiles.

Replacing Borg, the party's deputy group leader in Hörby, Cecilia Bladh in Zito, will be put forward for the role of mayor.

The move is a blow for the SD, which became the largest party in the town of Hörby after elections on September 9th, with a total of 35.4 percent of the vote.

Earlier in October, the Moderate Party and the local Swedish Senior Citizen Interest Party agreed to join an electoral alliance with the SD.

At the time, Borg told the TT newswire: “It feels fantastic, and also a big responsibility. If I fail in my role there will naturally be a big backlash.”

The party said it wanted to first use urban planning strategies to “build away” crime-hit areas, but that if that fails, it believed the worst areas should be demolished, as has happened to apartment blocks in cities in Denmark.

“We need to look at demolitions as an alternative,” the party’s leader, Jimmie Åkesson, said at a press conference on Tuesday to launch measures to combat the so-called “parallel society”.

He said that Sweden was “plagued by escalating serious crime”, and that no other problem faced by society so severely diminished Swedes’ freedom.

Other measures include bringing in so-called ‘search zones’ in areas badly affected by crime, or “culturally burdened”, another measure taken from Denmark.

Search zones in Denmark have empowered the police to stop and search people on the street, on their bicycles, or in their cars, without the officer needing to secure a search warrant, or even having reasonable suspicion.

Danish police can then check people’s possessions, search their bags, and even carry out a body search.

The Sweden Democrats said that police in visitation zones would also be able to raid flats and apartments in certain areas without needing to secure the normal permits.

Swedish authorities can then mount “dawn raids” on addresses where they have suspicion to believe that more people are living than are registered as doing so. Anyone then found to be living in Sweden without a residency permit would then be immediately deported.

The party also said that it wanted foreign citizens with “coordination numbers” or samordningsnummer to have biometric data such as their fingerprints and irises collected in the same way as those who receive national identity cards do.

“This is a question of locking up and in some cases deporting criminals who are a threat to society,” Åkesson said.