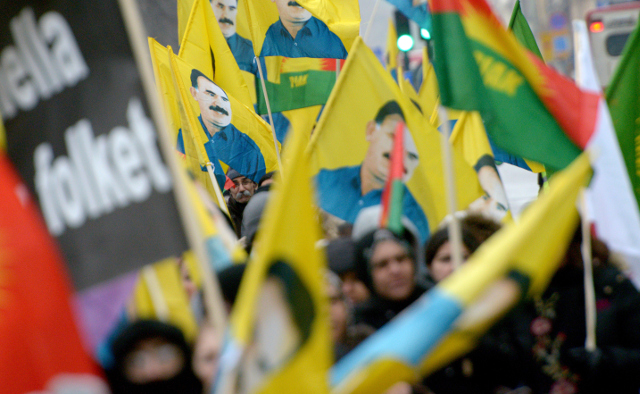 File photo of a demonstration in Stockholm in protest of the 1999 arrest of PKK leader Abdullah Öcalan. Photo: Johan Nilsson/TT

The 46-year-old man is accused of being a regional leader of the outlawed Kurdistan Workers' Party (PKK) in Sweden, Turkish state-run news agency Anadolu said late on Tuesday.

The agency said the man, identified only by the initials H.B., had also taken a photograph in front of an image of PKK's jailed leader Abdullah Ocalan, who is serving a life sentence on an island off Istanbul.

The Swedish citizen was detained in the southeastern province of Diyarbakir as part of an operation coordinated by the Diyarbakir prosecutor working with the National Intelligence Organization (MIT) and security forces. The operation was launched after the man allegedly came to Turkey for secret meetings with PKK-linked individuals.

The PKK has been waging an insurgency in Turkey since 1984. Fighting intensified in 2015 after the collapse of a two-year ceasefire.

The PKK is also blacklisted as a terrorist organization by Ankara and its Western allies.

“This is the most serious case I have encountered in a long time. It is unexpected and strange that he is arrested. His family lives there, he is often there,” he told Swedish news agency TT.

The Swedish Foreign Ministry could neither confirm nor deny the arrest on Tuesday.

“Sometimes it takes a while before information gets through,” a spokesperson told TT.