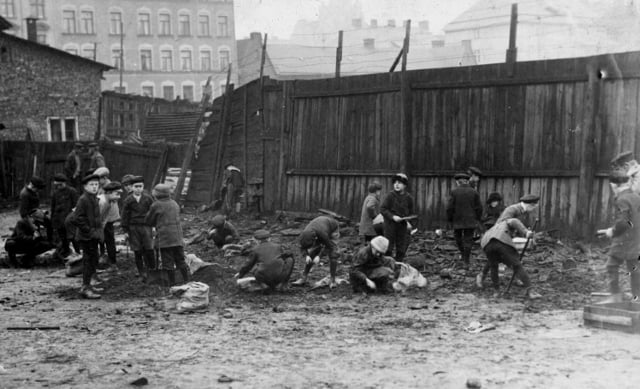 What seems normal now hasn't always been common: Mölle sea resort in Skåne in the south of Sweden was one of the first places in Europe that allowed men and women to bathe together in the open sea. The exact date this picture was taken is unknown, but it is believed to have been taken in the early 1900s. In 1902 around 30,000 people marched in protest against Sweden's at the time very strict rules which only granted voting rights to property owners with a certain income. The initially peaceful demonstration led to violent riots and dozens of arrests. Pictured here is the protest at Norra Bantorget, Stockholm.

In 1918 Sweden granted voting rights to both men and women, regardless of income. Johan August Bergman ran a “hökarbod och rusthålleri” (a grocery shop and a place responsible for providing soldiers with a horse and equipment) at Stigbergsgatan 60 on Stockholm's Södermalm island in 1903. Pictured are his wife and three shopworkers. The editorial staff of the Dagens Nyheter newspaper were invited to a day out on Midsummer's Eve 1908. The picture shows important employees from the paper on the terrace of the Sigtuna City Hotel. In August 1909, 300,000 workers all over Sweden refused to work and started one of the biggest general strikes in Swedish history. It was the first major conflict between Swedish Trade Union Confederation and the Swedish Employers' Association and lasted for about a month. A group of children do a ring dance in Humlegården park in Stockholm during the summer of 1910. This picture shows the ferry between Ragvalsbro to Mälartorget on Stockholm's Riddarfjärden in around 1910. The man with the grey beard is the ship's skipper; his name was Alfred Andersson. The explosives plant at Vinterviken (Winter Bay) just outside Stockholm, Nitroglycerin Aktiebolaget (now called Nitro Nobel), was Alfred Nobel’s very first company. Here a group of workers pose with a number of acid-filled bottles outside the sulfuric acid factory at some point between 1891 and 1914. The copper mines of Falun in Dalarna, central Sweden, in the beginning of the 20th century. Today, the mining area of the Great Copper Mountain has been declared a Unesco World Heritage Site. A man takes a walk on Falun's Åsgatan in the winter. Visible in the background is the big copper mountain's church (Stora Kopparbergs kyrka), the biggest church of the small town, which still stands today.