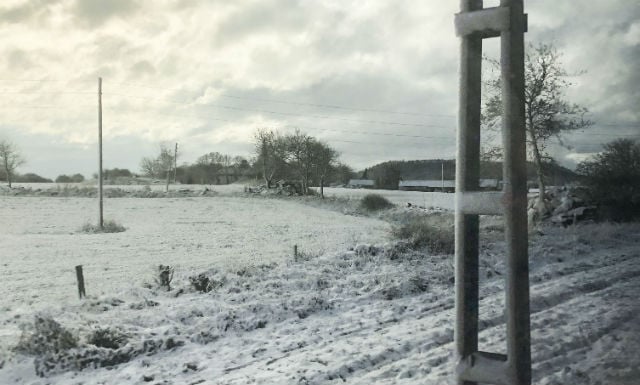 The view from a train between Skövde and Falköping in Småland on Saturday. Photo: Marie Carlsson/TT
Traffic at times ground to a near halt in parts of Småland on Saturday morning and black ice and powerful winds made driving difficult, with many cars driving off the road and several lorries unable to climb bills.
“It’s been a tricky situation,” Björn Öberg, press spokesman for Police Region Öst. “We had one case of a car which spun around and stopped in the middle of the road. That caused queues in which larger vehicles had problems.”
SMHI has issued a class one warning for snow in the counties of Jönköping, Västra Kronoberg, Halland, and large parts of Västra Götaland and Östergötland.
Several reports have come in to police in Jönköping of trees which have been blown over onto the road, but there have as yet been no reports of anyone being injured.
“There is some pretty cold air coming in,” warned Anette Levin, a meteorologist at SMHI.
“There’s a pretty high chance that the downfalls which have dropped over, for example, Götaland are going to freeze on Saturday night, which means there will be black ice in those places.”
SMHI has also issued a snow warning for the coast north of Uppsala.
“After that on Sunday, we have a high pressure front which is going to cover a large part of the country, so there will be clear blue skies,” she added.