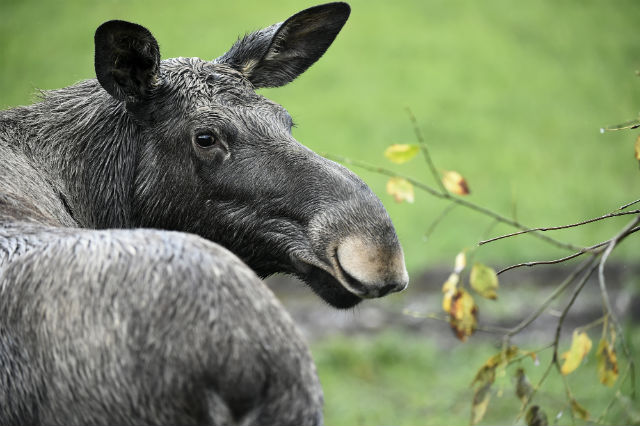 This elk, photographed in Östergötland in 2014, is not known to have troubled any schoolchildren. Photo: Mikael Fritzon / TT / kod
For two days in a row, the obstructive animal approached school children near the small town of Vagnhärad an hour from Stockholm, just as the school bus was arriving to pick them up in the morning.
“Two girls couldn’t come to school because of this elk, and had to go home again,” a hunter employed by the local Trosa municipality, told the Sörmlands Nyheter newspaper.
Sweden’s TT newswire did not name the hunter who reported the elk's antics.
But Håkan Eriksson, a hunter working for the Trosa municipality, has previously told Sörmlands Nyheter that it should be easier for municipal hunters to shoot and kill troublesome animals.
In 2016, he shot a local elk dead at point blank range, telling the local Eskilstuna-Kuriren that the animal had attacked him.
“The elk came in for an attack. I had no time to think. It was either her or me,” he told the newspaper.
He said he had managed to load his rifle and shoot the elk when it had been just a metre away from him, forcing him to leap away at the last moment to avoid being crushed under the dying animal.
“After that I just had to go home and change my underpants,” he joked.