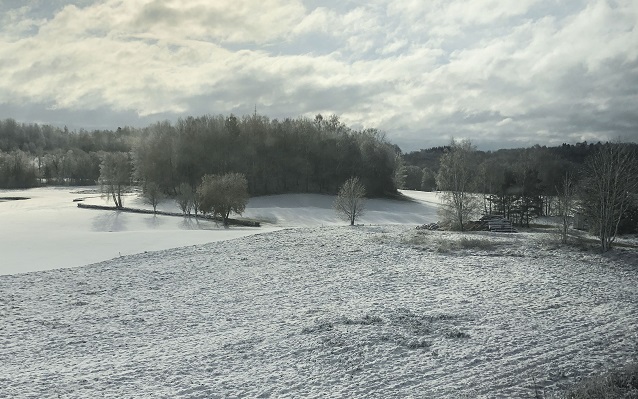 A snowy view from a train ride between Skövde and Falköping at the weekend. Photo: Marie Carlsson/TT

The heavy snowfall prompted SMHI to issue multiple Class 1 weather warnings for both snow (with 11 such warnings in place on Tuesday morning, primarily in the northern and central areas) and strong winds (in 19 mainly coastal areas).

Parts of Svealand and Norrland are forecast to get between 10 and 20 centimetres of the white stuff, while in Dalarna in central Sweden, the snow could even be as deep as 25 centimetres. Parts of Värmland in particular saw between 5 and 10 centimetres of snow fall in just a few hours, which may cause traffic disruption.

“The snow is turning to rain and that can be dangerous with slippery conditions on the roads,” SMHI meteorologist Malva Lindborg warned.

Götaland and the greater Stockholm area are expected to avoid the heavy snow, which is primarily set to fall in western Svealand and most of Norrland, while strong winds are predicted for the mountainous regions.

But there's good news, with warmer air on its way which will turn much of the snowfall into rain and bring a rise in temperatures over the next few days. Even the northern parts of Norrland can expect temperatures above zero, with only the high mountain regions remaining in the minuses.

“It is really warm air, so even northern Norrland could come into plus degrees,” said meteorologist Jon Jörpeland.

And in southern Götaland, the thermometres could reach 15C as early as later today, while parts of Skåne can expect similar highs in the next few days.

What's the weather like where you are? Send your pictures of the Swedish snowfall to [email protected] if you're happy for us to publish them