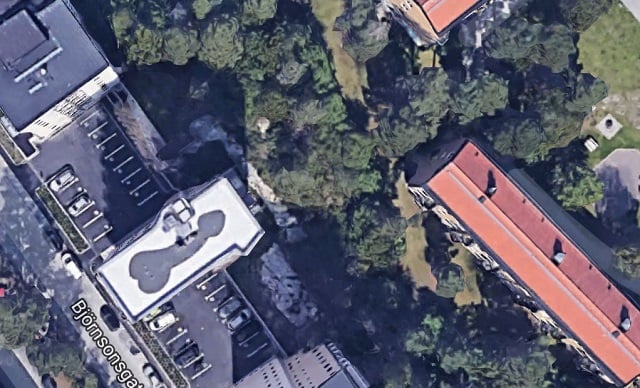 The images of the phallus-adorned roof first surfaced on a local Facebook group over the weekend, along with a second building two doors down, with a roof decorated with what appears to be a pair of breasts. They then got further attention when the story made it into Swedish tabloid Aftonbladet.

The buildings in question are two apartment blocks in Blackeberg, Bromma.

One of the residents, Maria Sjögren, told The Local she first found out about her home's unusual painting when a neighbour posted the Google Earth image on Facebook.

“Our family lives in the penis house,” she confirmed. “I don't have any immediate opinions, but it's quite fun. We would like to know the background and reason for the artwork.”

“I haven't had contact with the landlord myself, but heard that neighbours have, I don't know what their answer was,” Sjögren added. She said she had one question for the landlord or artist: “Was the the artwork there the whole time or was it added later on?”

The two buildings were completed in 2016 and were designed by architect Dinell Johansson, according to Primula's website, which makes no reference to their unique roof art.

When contacted by The Local, the company would not respond to questions about whose responsibility the artwork was, or whether they planned to take any action, saying: “We have chosen not to comment on the decor of any of our buildings.” Both pieces of artwork can be seen in this image. Photo: Google Satellite

For anyone wondering why this story sounds vaguely familiar, it's probably because it's not the first time that giant genitalia has caused a stir in Sweden.

Earlier this year, a painted blue penis was unveiled on the side of an apartment building in Kungsholmen, central Stockholm, as part of a project by an organization that arranges murals on residential buildings. Art usually remains on the walls for around six months before being replaced by a new piece, but the penis was erased prematurely due to a high number of complaints.

This came just a few months after authorities in the Värmland region appealed for information after an oversized wooden penis was found in a local park, sitting on a tree.

But perhaps the most famous work in the genre was the Gothenburg snow phallus that appeared on a frozen moat in the western city. A cleaning company removed the offending artwork, prompting a backlash and a new, even bigger snow penis to be created in its place.

READ ALSO: This is the man who created Sweden's massive snow penis