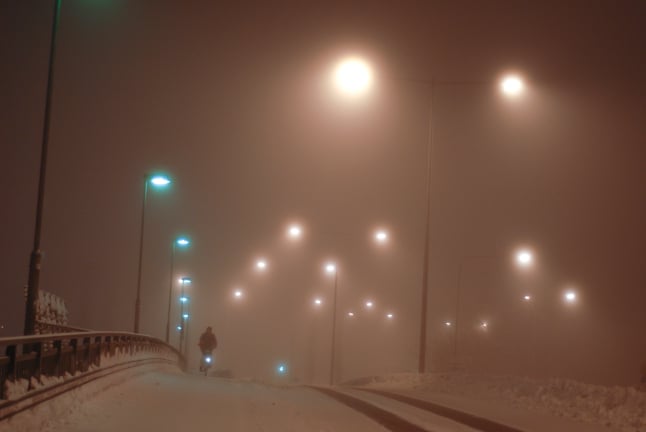 It's that time of the year again. Photo: Jonatan Stålhös/imagebank.sweden.se

Customizing your everyday surroundings is a big step towards a bright mood during the dark winter, a lot of users agreed.

Candy Johnson, Jodi Aldaya and Ursula Urška all stated that lots of candles around the house would create a warmer feel.

As well as candles, technology and light therapy can be deployed to help boost your mood.

Several readers said they used special kinds of lights designed to mimic natural daylight rather than artificial light, making up for the reduced sunlight.

“We have our SAD-lamp on a timer to make sure we're getting enough light,” Cattrina Mott explained.


Not only for plants: The right lighting is important for surviving the Swedish winter. Photo: Pontus Lundahl/TT

But you don't need to stop there: ensure your home is optimized for winter cosiness with the right furniture and décor that will make you feel happy and awake.

Ursula Urška recommended “white décor” rather than dark hues in furniture or walls, in order to create the illusion of light.

And Lindsay Balfour suggested stocking up on faux fur items for sensory comfort and warmth. Winter can be cosy, if you embrace it. Photo: Niclas Vestefjell/imagebank.sweden.se

Even with the right lighting and cosy fixtures, being inside your house all day long can have a negative impact on mood. So try to find fun things to do that will force you to go outside — even if it's hard to leave on cold, dark mornings, you'll probably thank yourself later.

Lee Skinner suggested focussing on health and fitness, noting: “nothing feels better than being fit, strong and healthy!” Cajsa C. Baldini agreed, adding that by exercising regularly “you force your body not to go dormant.”

If you still can't bring yourself to go for a run, reader Michael Gareth Jones recommended indoor sports, such beach volleyball (he said the sand helps remind you of summer and holidays) and badminton. If you’re based in Gothenburg, here’s his suggested centre.


Innebandy, or floorball, is a popular indoor sport in Sweden and another possibility of getting in shape for summer. Photo: Claudio Bresciani/SCANPIX

Brian Thurlborn had an idea for combining the physical benefits of exercise with the cosiness of home: “Buy a Nintendo Wii. Plenty of entertainment with one of these. Get a large screen TV and you think you are at the gym.”

Many users suggested long walks in the forest on any clear days, followed by a warming cup of tea or hot chocolate. Helen Helena added a special twist to this activity, which makes the most of the winter season: “Head out in the dark with headlights on, to a grillplats (Barbecue area) in the forest. Build a fire and grill your own food. If you're lucky you'll hear owls hooting or wolves howling. Kids love this sort of adventure.”

You can also take advantage of food that's in season only at this time, such as root vegetables. Lindsay Balfour said that she likes to collect recipes to try out during the winter – and install a projector system for optimal movie and gaming time while eating the results.

Liubov Koreva and Shireen Longva both suggested keeping your calendar full with activities with friends, like parties, wine tasting, cheese tasting, and clubs. “Keeping active and getting to know your friends on a regular basis is the secret to a successful winter hibernation!” said Shireen Longva.


A games night is a good way to get in touch with your friends during Swedish winter. Photo: Jessica Gow/TT

Alongside all the group activities, though, it’s really important to take some time to sit back and take some time for yourself. This is especially true for expats who are relatively new to the country and may not yet have an established social circle: try to enjoy the time alone and use it to relax and work on your hobbies, plans for the future, or simply looking after yourself.

Lindsay Belfour said she gives herself small tasks or events to look forward to during the year, and makes sure to have creative outlets for herself at home. This included gifting herself an Advent tea collection as “a small experience to look forward to this December” — why not see if you can build in similar treats to the winter months to keep yourself going?


A cup of a hot beverage can cause a big change in a person's well being. Photo: Jessica Gow/TT

Having a well-balanced diet often affects your mood and general health, and it might make sense to alter your diet during the winter months.

In Sweden, the lack of daylight means that many people lack Vitamin D. Readers Ilka Engelhardt, Chantelle Butler, Heather Jonasson, and Francesca Farolfi all stated that they take supplements of the vitamin when the colder months arrive — speak to a healthcare professional to find out if this would be a sensible option for you.

Others suggested eating lots of fruit, comfort food in moderation, and warm drinks.

“I drink a lot of ginger tea,” added Maria Selassie, stating it gave her the sensation of more energy. “I also love the taste and I know is very healthy.”

Warm beverages are also a way of coping for Sara Abd El Wahhab, who swears by Italian hot chocolate and green tea, the latter containing caffeine which might help keep you alert.

If none of the above do it for you and you just can’t seem to fight the winter depression, there’s another way: do as most Swedes do and leave the country.

“Vacation to some place warm in the middle of winter!” suggested Candy Johnson. Ursula Urška  agreed: “If you go in October to Greece, Malta, Portugal… you can still swim and enjoy a 25C summer, so that winter seems less long.”


Just enjoy the sun somewhere else – like a lot of Swedes do. Photo: Johan Nilsson/TT