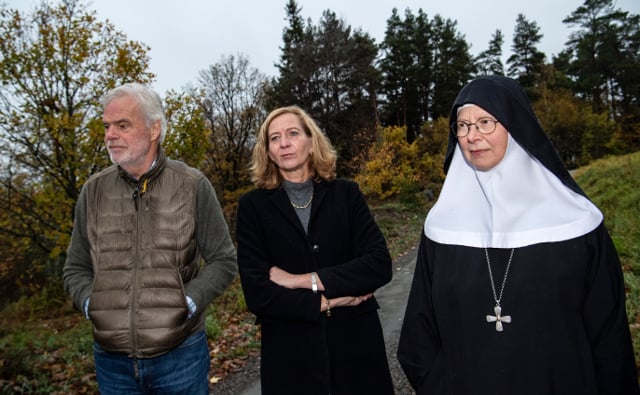 Carl Piper, Anita Ullman and Christa Claesson. Photo: Johan Nilsson/TT
Carl Piper, the so-called 'red earl' of Christinehof Castle, has joined forces with Mother Christa Claesson, Abbess of the nearby Mariavall nunnery, to block test-mining for the metal, which could be a key component in the batteries of the future.
“We are the little stone that causes the colossus with clay feet to collapse,” Claesson told Swedish newswire TT, referring to Nebuchadnezzar's dream from the Book of Daniel.
“We shall do all we can to stop the landscape being destroyed,” Piper added.
Piper, a former racing car driver, is a committed environmentalist, turning part of the land around his castle into a nature reserve, Christinehof Ekopark, and in 2011, taking part in a campaign which stopped the oil giant Royal Dutch Shell drilling for natural gas in the same formation.
ScandiVanadium, which is based in London hopes to list on the Australian Stock Exchange later this month, has been granted exploration licences to 22,000 hectares in Österlen, Sweden's picturesque southeastern corner,  a popular place for holiday homes for the cultural and business elite of Stockholm and Malmö.
British geologist David Minchin, Chief Executive of ScandiVanadium, said he welcomed the involvement of VetoNu, the protest group which counts Piper and Claesson as key members.
“I'd say that having a strong opposition group like VetoNu is actually a good thing,” he told The Local.
“We're all keen environmentalists and we are trying to build a green project, so it's logical that what we do has to be a green quarry. I think it's important that they challenge us to keep our discipline and our focus.”
The company has raised more than A$5m through a reverse takeover of a company listed on the Australian Stock Exchange and is expected to launch a website later this week, and to re-list later this month.
It plans to drill a series of small 125 metre deep bore holes to investigate the Dictyonema Shale Formation which crosses the municipalities of Hörby, Tomelilla and Simrishamn in eastern Skåne.
According to Minchin, formerly geology director of the private equity firm African Minerals Exploration and Development, the formation has unique properties, being high in vanadium, but very low in chemically precipitated heavy metals such as uranium, molybdenum, nickel and zinc.
The vanadium is also encased in clay rather than embedded in crystals, meaning it can be recovered through less environmentally and energy-intensive processes than at most other vanadium quarries, dramatically reducing the carbon footprint of batteries made from it.
“What really drives me, what makes me passionate about this, is the potential impact it has on climate change,” Minchin claims. “I've been looking for good vanadium products for many years, because of my interest in vanadium redox flow batteries.”
The batteries can have an operating life of more than 20 years, much longer than lithium batteries, and when they no longer function, they are 100% recyclable, making them an important future technology for energy storage.
The quarry, he said, would have less impact even than the other quarries already operating in Österlen, which few residents even notice.
So far though, few in Skåne seem convinced. The municipalities of Simrishamn and Tomelilla have both officially contested the company's licences, while VetoNu has a public petition on its website for local residents to sign
Anita Ullman, chair of VetoNu, told TT that she believed the hype around vanadium would turn out to be as overblown as that around shale gas eight years ago.
“I think there's a big similarity between the hype around battery metals and that around shale gas,” she said.
Carl Piper said he thought there was little chance that the green jobs promised by ScandiVanadium would ever appear, pledging  to continue to block the plans “for as long as necessary.”
“I don't believe that this project is going to create any new jobs,” he said. “And if it does get going, will it end after five years? It's a waste of time.”