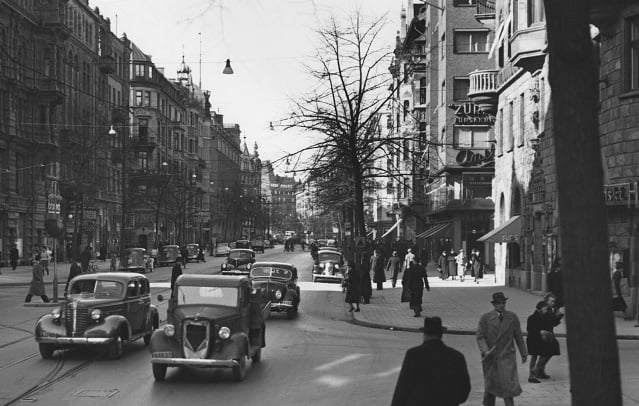 Birger Jarlsgatan in the 1930s. But how much do you know about the man behind the street name? Photo: SvD / TT

Whether you're wandering the cobbled lanes of a historic centre or doing some window-shopping on a busy central street, at some point you might start to wonder about all the people who trod the same path before you.

Sweden's streets have stories to tell, and some of them are hidden in plain sight, in the names of roads and paths which pay homage to Swedes of decades and centuries past.

Birger Jarl is a big name in the history of Sweden and particularly the capital, since he is believed to have founded Stockholm in the 13th century – that claim is sometimes disputed, but it's true that Stockholm became much more important under his rule, which also saw him establish closer ties with Sweden's neighbouring countries.

'Jarl' is actually a title, which at the time was given to members of Sweden's various royal families who were next in line to the throne. Birger was the last person to hold the title. Probably Sweden's most famous prime minister, Olof Palme led Sweden's Social Democrats for 17 years and governed the country between 1969-76 and 1982-1986. He was well known for his speaking and debating skills, so it's no surprise that he founded Almedalen, Sweden's annual politics festival which sees the political party leaders gather on Gotland for a week of speeches each summer. The event is sometimes called Palmedalen in reference to his founding role.

Sadly he is best known for his murder in 1986, which was the first assassination of a national leader since the 18th century – and remains unsolved to this day. He was shot at close range while walking home from the cinema with his wife Lisbet and no bodyguard.

In Stockholm, the street that bears Palme's name was formerly known as Tunnelgatan and was renamed after the prime minister was shot there. Social Democrats often leave red roses at the spot as a sign of respect and remembrance. Streets and memorials around the world, from Algeria to Russia, also carry his name. Another street you'll find in many Swedish cities and towns takes its name from this engineer and soldier, born in 1625.

Although born into the peasant class, Dahlbergh proved himself as a capable military man during the many wars that took place through his lifetime, rising to the ranks of nobility. Earlier, he trained as a scribe and architect, travelling around Europe in the mid-1600s and becoming particularly well-known for his designs of fortifications.

He died at the age off 77, a field marshal, and was buried in a tomb of his own design. Another famous Erik, the man who gives his name to Sankt Eriksgatans across the country and Stockholm's Sankt Eriksplan went by many monikers, Erik the Holy and Erix IX of Sweden being the other two most common. It is his face which is depicted on Stockholm's coat of arms. But not a lot is actually known about his life, dating to around 1120-1160.

He is generally portrayed as a fair and just ruler who supported the rights of the oppressed, but it's debatable whether this should be taken at face value. He is known for consolidating the religion of Christianity across Sweden and for codifying the country's laws.

Erik died at the hands of rebels who are said to have accosted the king during an Ascension Day Feast, pulling him from his horse and beheading him. Magnus Ladulås is a Swedish king usually known as Magnus III of Sweden outside his home country. You'll find streets and a Stockholm pub named after him. He was the second son of Birger Jarl and came to power after ousting his brother from the throne, after which he ruled from 1275 until he died in 1290 at the age of 50. He is buried in a tomb in Riddarholmskyrkan in Stockholm's old town.

In 2011, a team of archaeologists got permission to open the tomb and examine the presumed remains – only to find out that they were around 200 years too young to belong to the king. Dag Hammarskjöld was the second Secretary-General of the UN, becoming the youngest person to hold the post at the age of 47, and generally regarded as one of the most skilled diplomats to do so. US President John F Kennedy hailed Hammarskjöld as “the greatest statesman of our time” and staff praised him for his efforts in mingling even with junior level staff.

He was one of 16 people killed in a plane crash in 1961 while en route to negotiate a cease-fire, in a disaster whose circumstances remain murky. He was posthumously awarded the Nobel Peace Prize, and as well as streets named after him across Sweden and as far afield as the USA, several universities have named libraries and rooms after the distinguished diplomat. This 13th-century royal advisor's name is sometimes spelled Torgils or Tyrgils, and was a member of the privy council but in practice ruled Sweden while King Birger Magnusson, who ascended to the throne at the age of ten, was too young to do so.

He was supposedly faithful to the royal family, taking the king's side in one dispute between the royal and his two brothers and helping quash their rebellion – but when the brothers later gained the king's trust, they turned him against Knutsson, who was executed in Stockholm.

A Stockholm street was named after him in 1885, when many of the capital's roads were renamed in order to get rid of double names and lessen confusion, as well as to consolidate longer streets which had previously had different names in different parts. Image: This file is from the Mechanical Curator collection, a set of over 1 million images scanned from out-of-copyright books and released to Flickr Commons by the British Library. View image on Flickr  View all images from book  View catalogue entry for book. , Public Domain, Link