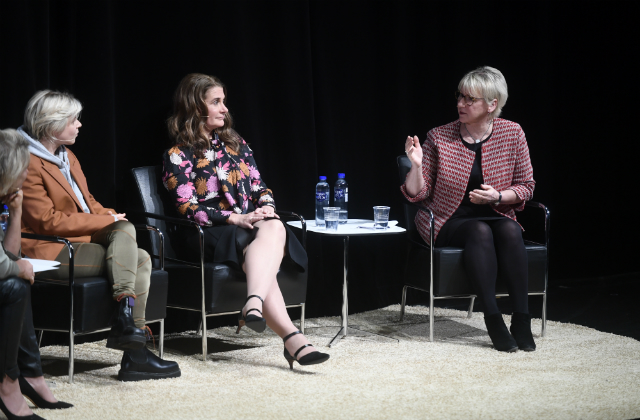 Wallström (right) made the comments during a panel debate on women’s rights which was also attended by Robyn (left) and Melinda Gates (centre). Photo: Fredrik Sandberg/TT

Peterson recently visited Sweden in connection with the release of his new book '12 Rules For Life, an Antidote to Chaos' in which he airs a number of controversial anti-feminist views. The professor is also known to be skeptical of the effects of climate change. In a recent interview with Norwegian journalist and entertainer Skavlan, Peterson said that divorce was damaging for children. “We know that stable, intact, families with two parents is the best for children,” he said.

In gender-equal Sweden, which in August released a book on the country's four years of a “feminist foreign policy”, his views and ideas have stirred up a fair share of emotion. To say the least.

During a pro-women panel debate in Stockholm on Wednesday, Foreign Minister Margot Wallström – a staunch supporter and activist for women's rights – couldn't hold her anger towards the Canadian psychologist back, telling the audience that when it comes to his anti-feminist views, she “can't grasp why people waste so much time on that man.”

“I think he should crawl back under the rock he came from,” she said according to several Swedish media outlets that covered the event which was also attended by feminist activists Melinda Gates and Robyn.

Wallström's comments quickly made waves on Twitter, where conservative MP Hanif Bali was one of the first to dish it out against the minister by tweeting: “This overwintered anti-Semite is capable of criticizing Jordan B. Peterson when he isn't there, but gives her vote to allow Saudi Arabia to enter the UN's commission for women.” Wallström has defended last year's decision to allow the kingdom a seat in the commission by saying the country “could learn something” from being a part of it.

Following Bali's tweet, which was later taken down, Jan Eliasson, a Swedish diplomat and the former deputy secretary-general of the United Nations, came to Wallströms defence.

“When I read that @hanifbali called @margotwallstrom an overwintered anti-Semite it made me think about @DagHammarskjold and of his [quotes]. “'To abuse the word is to show contempt for the human being. It undermines the bridges and poisons the waters.'”

Wallström is one of the drivers behind Sweden's feminist foreign policies and has been an outspoken critic of various nations' gender policies.

In 2015, Stockholm's diplomatic ties with Riyadh were frozen after she called Saudi Arabia a “dictatorship”, denouncing in particular its treatment of women in brazen terms that other Western diplomats might have avoided in dealing with the oil-rich state.

Last year, she also joined the #MeToo campaign and said she had experienced sexual harassment “at the highest level of politics”.