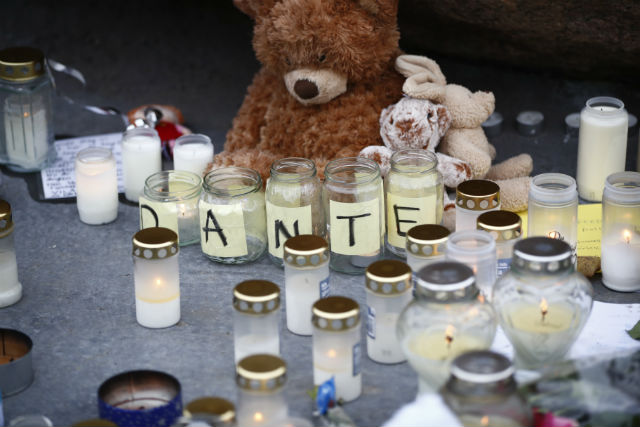 Some of the candles set out in Falkenberg's main square. Photo: Thomas Johansson/TT
The local church will also remain open all weekend offering counselling and comfort for those affected by the news.
Thousands of volunteers had joined the hunt for 12-year-old Dante, who went missing near his home in Tröingeberg, Falkenberg, at 5pm on Tuesday after leaving to take the family dog for a walk. The dog returned home without him.
The dead body was found in the water at the Hertings power station on the river Ätran which flows through the town. Although it has yet to be identified, police say there is a strong probability that it is the 12-year-old's.
“I mostly just feel empty just now,” Lejla Kycykaliu, a teacher who had met Dante several times, told the local Hallands Nyheter newspaper. “But it feels great that everyone took part and that so many people care.” More candles in Falkenberg's main Stortorget town square. Photo: Thomas Johansson/TT
“There were a lot of tears when I found out what had happened,” Camilla Sölvander, one of the volunteers, told the Aftonbladet tabloid.
“The engagement of people has been unbelievable,” Carina Hoffmann, another local, told the paper. “I never believed that it could be possible that a whole town would get involved in this sort of way.”
Bengt Espling, who leads the Swedish volunteer group Missing People, had been working almost without a break for three days when he heard the news, getting only six hours' sleep in total since he was contacted.
“It was as if everything ran out of me,” he said of his feelings. “It's of course not the same time something like this has happened to us. But this hit me extremely hard. The air just went out of me.”
Missing People mobilized around 3,000 volunteers to take part in the search. The local vicar Bertil Göranzon is keeping the church open throughout the weekend. Photo: Thomas Johansson/TT
As well as the local church, Falkenberg's city government is also offering support of the weekend for those needing counselling and other support.
Local schools are also planning to offer support to pupils when they return on Monday.
“This is very sad news to receive and our thoughts go out to the boy's family and friends,” Stigert Pettersson, head of the municipality's education department.