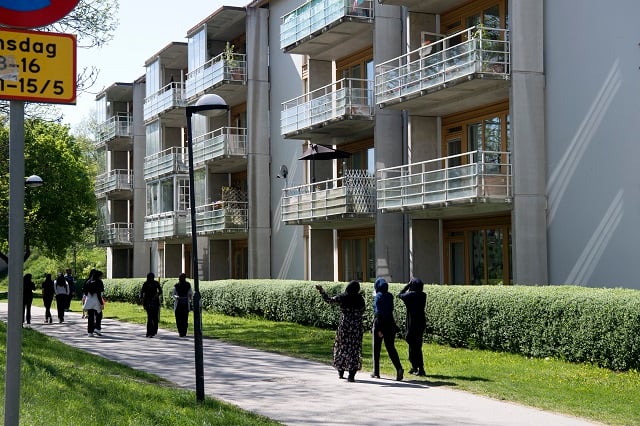 The report, called Different worlds?, looked at inequalities in different measures of quality of life – such as life expectancy and housing situation – and how these were linked to geographic and educational differences as well as country of birth.

Here are five of the key findings.

People born outside Europe are the most likely to live in overcrowded housing. This is defined as less than 20 square metres of living space per person.

People in Sweden's major cities are more likely than those in small towns to live in apartments than detached houses. Swedish-born people and those with higher levels of education are the most likely to own their own homes.


In small towns, people are more likely to own their own house. Photo: Henrik Montgomery/TT

Single parents and their children

The vast majority of women with children aged under 18 live together with their children, while this is slightly less common when it comes to men.

The groups of fathers who are least likely to live with their own children are those with lower levels of education, which mirrors the fact that this group also contains the highest proportion of single and separated parents. And the pattern was also reflected among mothers, although the differences were less stark.


It's slightly less common for men to live as a single parent. Photo: Isabell Höjman/TT

Two factors apparently linked to being child-free at the age of 30 were living in a large city as opposed to a smaller town, and having a lower level of education. This applied to both men and women.

Perhaps unsurprisingly, native Swedes were far more likely than foreign-born residents to live a ten-kilometre distance or less from their parents. The report noted that having family living close by is often a particular advantage to parents of small children.


Getting grandmother to babysit is something many foreigners miss out on. Photo: Carolina Romare/imagebank.sweden.se

Again, there are big differences when it comes to life expectancy between different demographic groups in Sweden, with level of education apparently the biggest factor.

At the age of 30, women with at least three years of post-secondary education can on average expect to live another 57 years while men in the same educational category have a remaining life expectancy of 55 years.

For men and women without secondary education, the remaining life expectancy is around five to six years less – and what's more, people with higher levels of education can generally expect to live in good health for a greater proportion of their remaining years. This means they are less likely to be affected by long-term illness or health problems that impedes their ability to carry out normal daily activities.


There are big differences when it comes to life expectancy between different groups. Photo: Janerik Henriksson/TT