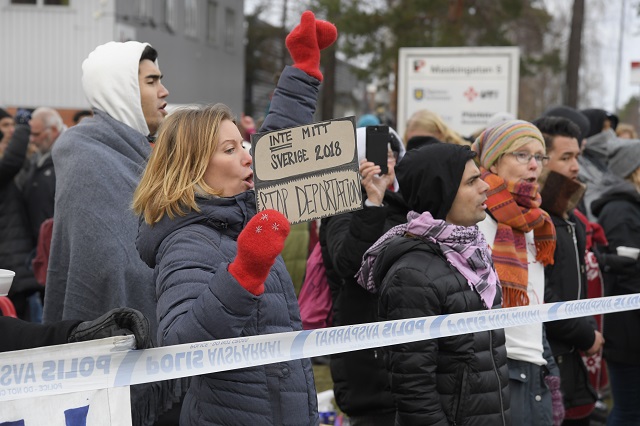 Demonstrators protest the deportations, with one sign reading 'Not my Sweden'. Photo: Anders Wiklund / TT

A police spokesperson confirmed that the Afghan citizens were taken by bus from the custody centre in Märsta, north of Stockholm, to Stockholm's Arlanda airport.

The spokesperson said the transfer took place “relatively calmly” although a small number of the roughly 100 protesters were escorted from the scene.

Initial reports from campaigners had said that 48 people were due to be deported on Monday evening, but only around ten people were on the bus, according to the TT newswire. It is unclear if any more people were taken to the airport from the centre, but it is fairly common that practical obstacles to a deportation may be discovered only at the last minute, meaning that planned deportations do not always go ahead.

'Swedish Youth build a chain across the road to stop the transport. Police push them away.'

The deportation was set to be carried out at 9.40pm using a chartered plane to the Afghan capital Kabul, according to the network Ung i Sverige (Young in Sweden) which has campaigned against forced deportations to the country it claims is not safe.

“It feels terrible. I really thought that the deportation would be cancelled, because it's so remarkable to deport people to Afghanistan, especially in the current situation,” said Elin Morén, an Ung i Sverige campaigner and one of around 100 people who protested outside the custody centre in Märsta.

Activists have been campaigning against the Swedish Migration Agency's continued deportations of Afghan asylum seekers for over a year, including previous protests at the country's airports and, in one case, a protester boarding a plane and live-streaming her refusal to disembark until an Afghan citizen was also allowed off.

The Swedish Foreign Office's official travel advice to residents is to avoid all travel to Afghanistan “due to the security situation”, but the Migration Agency maintains that parts of the country, including its capital Kabul, are safe enough for asylum seekers to be returned there.

A press spokesperson for the Migration Agency stressed that the cases of each of the people with deportation orders had been individually assessed by both the agency and the Migration Court.

Niclas Ericsson, a communications adviser at the Swedish Committee for Afghanistan based in Kabul, said that the country's security situation was “very strained”.

“The conflict between the government and the armed opposition groups has intensified since 2016. There are no clear signs that the situation is getting better,” he said.