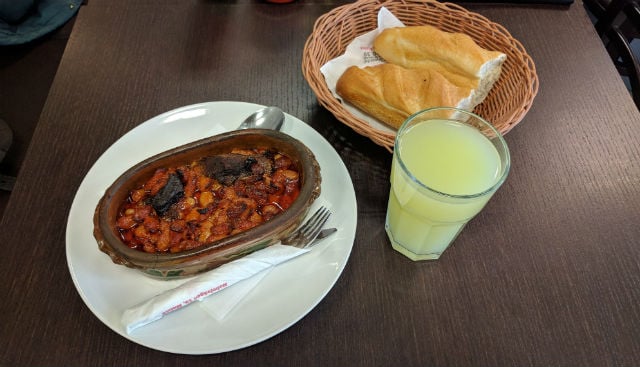 Tawë is burnt to a crisp on the top but tasty. Photo: Richard Orange
Milaim Makolli waves at the cycle helmets hung near the ceiling of the glass conservatory at Burek House Restaurant, each decorated with the flag of a different country.
“Kosovan, Bosnian, Croatian, Albanian, Italian, Spanish: Everyone comes here, everyone possible. Swedish people also!” he declares.
“Our best customer is the Left Party,” he goes on, explaining that the party’s headquarters for Southern Sweden is just a block away, and the restaurant sends out almost daily parcels.
Burek House has built up a loyal following for its stodgy Balkan comfort food ever since Makolli’s son Valon opened it back in 2012. Behind the counter, crispy burek pies glisten, filled with beef, spinach, or white cheese, their flaky exteriors masking soft layers of ultra-thin pastry.
“They do it all by hand, there’s no machine,” says waitress Edmonda Resa (above, second from the right), stretching her hands high above her head to demonstrate the energetic movement required to stretch the dough.
“They have a very big table and they throw it in the air, like this, and then they fold it up. If you use a machine it will be too thick and dry.”
The bureks made in the kitchens here at Burek House don't just supply the customers who fill out its diner style tables. They are sold all over Malmö, with the restaurant operating stalls at nearby branches of the Ica and Coop supermarkets.
As I already eat more portions of burek than is probably healthy, I instead try the tava, a ceramic dish filled with bean stew and chunks of beef that has been baked in the oven.
“The taste is special,” Resa says. “It’s not the normal beans like the other ones. It’s a better taste.”
She's right. It's the perfect lunch for a cold autumn day, with the meat above the surface of the stew roasted to a crisp, while that below is so soft it falls apart and blends with the bean stew around it., so it can be scooped up with spongy white bread. I wash it down with a glass of the restaurants wonderfully sour home-made lemonade.
Resa, who is from Albania, tells me she lived in the UK for 12 years, working as a nurse and studying business and psychology at Oxford University.
“It's a good combination,” she says drily. “A very high education and now me working here as a waitress!”
When I’m there on Saturday, the restaurant is filled with prosperous-looking families of Balkan origin enjoying a taste of the homeland, their children speaking Swedish, while the parents talk over them in their mother tongues.
Other dishes on offer include gulasch stew, stuffed peppers and cabbage leaves (dolma), and Balkan grill specialities such as cevapi (a sort of sausage-shaped meatball), and pljeskavica (a bit like a burger), as well as a sumptuous display of Balkan cakes and sweets.
When I try to pay for my meal Milaim Makolli refuses, and no matter how much I beg the team of waiters to defy him and take my card, they won't yield, so eventually I leave, well-fed but defeated.
Name: Burek House
Address: Nobelvägen 17
Website: http://www.burekhouse.nu/