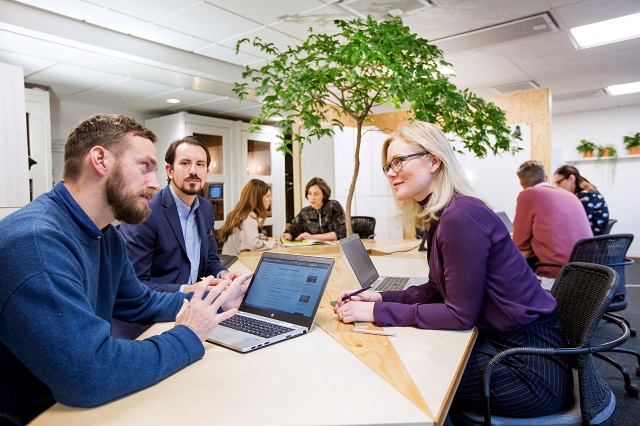 Have you joined a styrelse yet? File photo: Melker Dahlstrand/imagebank.sweden.se
The styrelse is at the absolute centre of Swedish life. It is the instrument that allows Swedes, with their highly individualistic culture, to do so much collectively. It is the smallest unit of the country’s democratic society and the habits Swedes learn in them are reflected at the highest level of politics.
READ ALSO: Why do Swedes like to be ‘alone together’?
No joint activity is too small or informal to have one. If a group of friends meets regularly to play frisbee in the park, before long they’ll feel an overpowering urge to establish a club, with its own establishing statutes, board, rotating chairperson, protocols, and annual meeting.
So if you’re living in Sweden for the long term, its worth learning how they work in preparation for the day you find yourself drafted onto the styrelse. Just stick to these ten rules for surviving and thriving in this most Swedish of institutions.
1. A styrelse meeting is to be taken seriously. However light-hearted the relationship with your fellow members normally is, and however silly the activity you are organizing, once the meeting begins, you get down to business. Swedes often sit on multiple boards, so they can’t afford to waste time making jokes, idle chat, or facile suggestions. Doing so will not be appreciated (even if your fellow members are too reserved to show it).
2. Tell the chairperson (ordförande) what you think beforehand. The chair of the meeting will often have a quick informal chat to all of the other members before the meeting to make sure there are no potential conflicts which could make things uncomfortable. If any do arise, they will try and think of a compromise. Swedes, after all, hate conflict. This your best chance to be open about how you feel, so use it. It’s also a good opportunity to bring up any major new issues you intend to bring to the meeting, so the chair can put them on the agenda. File photo: Melker Dahlstrand/imagebank.sweden.se
3. Do your research. If you have a new proposal to bring to the board, it is best to do some preliminary research so you know what you are talking about before you suggest it. Your fellow members will then feel that you aren’t wasting their time with half-baked ideas, and will be less likely to quietly omit your suggestion when they hold the next month’s meeting.
4. NEVER deviate from the dagordning. At the start of each meeting, the chairman will distribute a printed dagordning (agenda) to each member. Usually it will also be emailed around a few days beforehand. To foreigners, this document can seem absurdly formal, with the date, a list of members present, and their expected role, together with a numbered list of topics and subtopics to be discussed. Deal with all the points in strict order. To bring in ‘övriga frågor‘ (other issues) before the specific time allotted for them is extremely bad form (but of course, the Swedes on your board will never let you know this). Also, don’t bring up anything of any consequence under övriga frågor, when everyone is itching to get home and out of there. Serious issues should be added to the dagordning ahead of time.
5. Don’t interrupt. As each topic comes up for discussion, the chair will let everyone they expect to have an opinion give their thoughts. It is important not to butt in while this is happening. If you have something you are burning to say, note it down and wait your turn.
6. A constructive atmosphere is paramount. For most Swedes, the mark of a successful meeting is more about how the issues where discussed than what, if anything, was actually decided. The goal is a calm, reasonable discussion, with no overt conflict, in which everyone felt able to make their views known. If you strongly disagree with something the others are proposing, but can probably live with it, it is best not to push it too hard. There is a level of raised voice that Swedes experience as shouting or screaming which in some other cultures would merely count as forceful argument. So tread carefully. Photo: Henrik Trygg/imagebank.sweden.se
7. Shared interests trump individual interests. In the run-up to the UK’s Brexit referendum, Dagens Nyheter’s editor Peter Wolodarski wrote an article comparing the EU to a ‘residents’ association’ (bostadsförening). “You don’t have to love the decisions made, but some kind of organisation needs to take responsibility for the common areas,” he wrote. A residents’ association won’t work, he went on, if everyone is “seeing to their own interests and ignoring the shared interests.” The irony in all this is of course in the UK residents’ associations don’t actually work, and that Wolodarski may have inadvertently put his finger on one the reasons for Brexit. Coming from the UK, I still find it extraordinary how reluctant the Swedes on my building’s board are to push their own individual concerns, knowing that in the UK, such meetings would break down into a constant war over lawn care and hedge trimming.
8. Remember your role. As well as the chair, a styrelse meeting will typically have a member appointed as ‘secretary’, whose job is to prepare the protokoll or mötesprotokoll (minutes), a record of what was said and decided. This is typically emailed to all members either immediately after the meeting, or along with the dagordning just before the next one. One or more members will also be appointed justerare, which means their job is to stay sufficiently awake during the meeting that they can check that the protokoll is accurate and then sign it. However inappropriate this level of formality may seem to the scheduling of your allotment society’s annual table tennis tournament, take your role at least as seriously as you take your day job.
9. Do what you said you’d do. In the meeting you may be asked to make a phone call, order something, or research something. This commitment will be noted down and recorded, so if you want to avoid the humiliation of your failure being coolly pointed out as the protokoll is read out at the next meeting, do it.
10. Maintain your awe at the wonder of Swedishness. It may seem perverse to bring such a level of bureaucracy to things that are supposed to be fun and friendly. It can be disconcerting to see your friends and neighbours temporarily transformed into humourless functionaries. But keep in mind how people from your own country would manage such issues of collective interest and marvel.
READ ALSO: Five hacks to help you survive living with Swedes