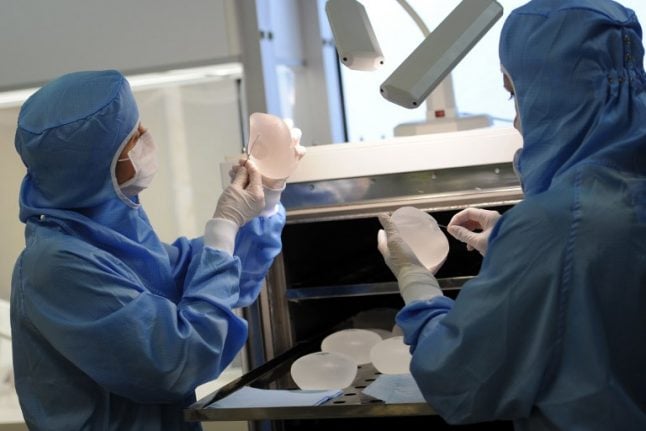 Technicians check silicone breast implants in Paris in a 2012 file photo. Photo: Miguel MEDINA / AFP
The court in the Paris suburb of Nanterre ordered TUV to pay €4,600 ($5,200) to each of the Swedish plaintiffs for the harm caused by approving implants made by French firm Poly Implant Prothese (PIP).
It also ordered the company to reimburse the cost of having the implants — which were filled with a cheap industrial-grade silicone gel used in electronic equipment —  removed.
It comes a month after France's highest appeals court ordered that TUV be retried for negligence over its role in the affair, after being initially cleared of liability by a lower court.
After a separate trial, the company had already been ordered to pay €60 million ($69 million) as a deposit for potential compensation for 20,000 women who received the defective implants.
The PIP implant scandal made global headlines in 2011, after doctors first noticed abnormally high rupture rates in the implants. Some 400,000 worldwide, most in Latin America, are believed to have received the enhancements. Thousands had them removed, despite health authorities in several countries declaring them not to be toxic.
PIP's founder, Jean-Claude Mas, was convicted of fraud and sentenced to four years in jail. His company was shut down in 2010.