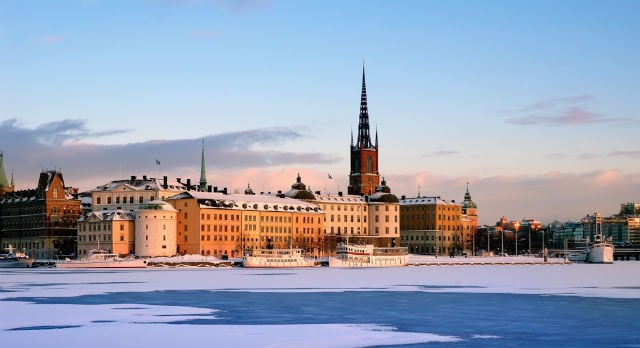 There’s no denying it, Swedes are good at Christmas. In fact, Santa Claus himself might even be Swedish; he certainly has a typically Swedish attitude to travel. What could be more sustainable than a reindeer-driven sleigh?

The second most sustainable way to travel is by Arlanda Express, the eco-friendly express train that gets you from Arlanda Airport to central Stockholm in just 20 minutes. And with Arlanda Express’s Early Bird offer you can save 30 percent on your train ticket when you book seven days before travelling – great news when Christmas is just around the corner.

First on the agenda is to fill yourself to the brim with Christmas spirit (we’re talking metaphorically here, although we’ll get to Glögg later…).

Kick back in your train seat, a perfect example of functional but comfortable Scandinavian design, and get a glimpse of the scenic Swedish countryside as you speed towards Stockholm. If you’re seeking a traditional white Christmas, you may be in luck – it’s not unlikely to see snow this time of year. Take advantage of the on-board wifi to research Christmas markets in Stockholm and download a transit app like Citymapper so you can easily hop around the city.

Nothing quite gets you in the Yuletide mood like some Christmas jingles so while you’re surfing the web for free, listen to some Swedish Christmas classics on our Arlanda Express x The Local Christmas Spotify playlist.

Go on a lantern-lit stroll

Gamla stan, Stockholm’s Old Town, is a magical place any time of year. But the narrow cobbled streets, gold-hued buildings and cosy, candle-lit cafes are practically made for Christmas.

Take a walking tour of Gamla stan by lantern light to experience the medieval city centre at its most twinkly. Learn about the local area and wind your way up to the Christmas market in Stortorget, the main square in the Old Town. Soak it all in and wash it all down with a glass of Glögg, a Scandinavian mulled wine made with brandy, almonds, raisins and spices. And don’t forget the pepparkaka, a gingersnap biscuit popular in Sweden this time of year.

Swedes love design; they’re famous for it and it’s evident everywhere from the thoughtful design of Arlanda Express trains to the multitude of shops (many selling typically Scandinavian brands) dotted around the city.

Stockholm’s biggest department stores should be a pitstop on any winter city break. The window display at Nordiska Kompaniet, a swish department store in the city centre, is always nothing short of a masterpiece. Likewise, ubiquitous department store Åhlens always pulls out all the stops with its Christmas window decor.

Take a little piece of Sweden home with you. A julbock – or Yule-goat – is a must-have under any Swedish Christmas tree, and it wouldn’t be Jul (the Swedish word for Christmas) without a wooden Tomte figure. The Scandinavian mythological character is a mischievous sprite traditionally responsible for the protection and welfare of the farmstead (and almost definitely a distant cousin of Santa. The evidence is mounting that he is, in fact, a Swede).

Strap on your skates One of the most special things about Stockholm at Christmas is that there’s a frozen lake around nearly every corner. Hard to believe that in a capital city there could be so much nature, but there is an abundance of water and much of it totally freezes over in winter.

If you own a pair of skates, make sure to pack them; there is nothing quite as thrilling (or authentically Christmassy) as skating on natural ice. However, it’s important to know the risks so always make sure ice is safe before venturing out onto it. There are guided ice skating tours in the Stockholm region or a number of manmade rinks such as the ice rink in Kungsträdgården which is just a stone’s throw from Central Station. The ice rink is free to use – you just have to pay for skate rental if you don’t have your own – and open until 9pm every night of the week.

Treat yourself to a Julbord

No Christmas trip to Stockholm is complete without a Julbord, an honest-to-goodness Scandinavian smörgåsbord. The traditional Swedish Christmas table is a huge buffet that includes several staple dishes like pickled herring, meatballs, beetroot salad, cheeses, sausages and salmon. Many restaurants in Stockholm serve a Julbord from the end of November; there are even a couple – like Herman’s with its spectacular view of Stockholm – serving entirely vegetarian spreads.

But if you really want to take the boat out you should literally take the boat out. Hop on the ferry out to Fjäderholmarnas Krog, an award-winning restaurant on the city’s nearest archipelago island. Even the grinches among you won’t fail to be blown away by the postcard-perfect Swedish setting. Make sure to book ahead! You’ll get a four-hour slot which, trust us, you’ll need.

Make the most of Christmas in Stockholm. Get to the city centre as fast and easily as possible by booking your airport transfer with Arlanda Express, the quickest route between Arlanda Airport and downtown.

This article was produced by The Local Creative Studio and sponsored by Arlanda Express.