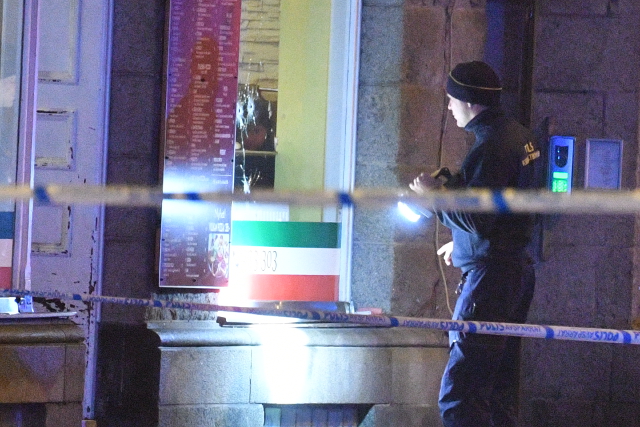 Police cordoned off the street outside the restaurant. Photo: Johan Nilsson/TT
At least four shots were fired through a window into the fast food restaurant shortly after 8pm, when several other customers were present either eating or picking up takeaways.
“We were rung by several people reporting loud bangs and immediately dispatched officers. We then heard that there was an injured person and found a man at the pizzeria,” police control room officer Richard Lundqvist told Sydsvenskan.
A witness told the newspaper that they saw a black car with its lights off waiting in a neighbouring street minutes before the shooting.
“When I turned my head away I heard four shots ring out in quick succession. Then the car started its engines and pulled away,” she said.
The shooter had not joined the group in the car, so he must have left in some other way, she said. The victim, meanwhile, was still able to move and communicate immediately after the attack.
“He did not seem seriously wounded, because he moved around and communicated with the paramedics,” she said.
READ ALSO: Three men seized for Malmö cyber café shooting
According to official police statistics published in July, the number of recorded shots fired in Malmö declined to 18 in the first seven months of the year, compared to 43 and 30 over the same period in 2017 and 2016 respectively.
But the rate of shootings has since picked up. Sunday's attack comes less than six months after three men were shot dead in an attack at the Galaxy Cyber Café, just a few hundred metres from the restaurant.
The witness told said that she was shocked at the succession of attacks in her neighbourhood.
“I live here in the area and it's almost as if we're getting used to this sort of thing. But it's just too terrible, it has to stop.”
Malmö in October launched a new 'Sluta Skjut', or 'Stop Shooting', programme, which builds on the Group Violence Intervention (GVI) strategy used with good results in many US cities.
READ ALSO: Malmö calls gang suspects to meeting in hope to stop shootings
READ ALSO: Why Sweden has more fatal shootings per capita than Norway and Germany