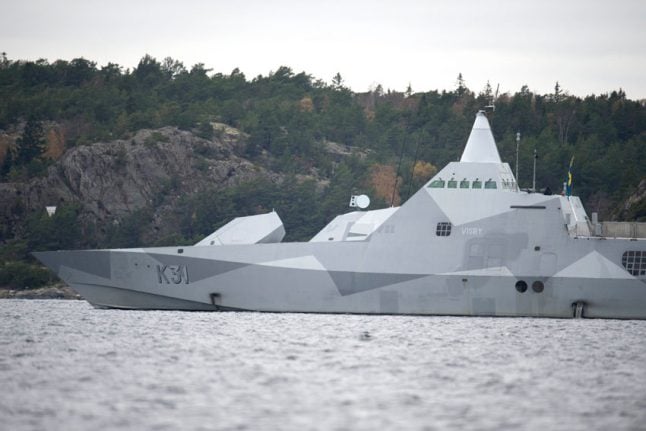 File photo of a Swedish Navy ship near Muskö. Photo: Fredrik Sandberg / TT
Senior Public Prosecutor Hans-Jörgen Hanström said both men entered the underground base on more than one occasion between November 30th and December 2nd, but he declined to give further details.
According to court documents seen by The Local, both men are in their thirties. One is from the United Kingdom while the other is from Belgium. Although some media reports referred to the men as tourists, prosecutors did not immediately specify whether they were just visiting Sweden or if they lived in the country. The court documents did state however that both men required a translator.
The lawyer for one of the men said that his client denied the charges against him.
“Personally, I think this is a heavy-handed overreaction and something has been set in motion that is rather ridiculous,” Lars Hurtig said.
According to a report in Dagens Nyheter, the men said that they were simply interested in the naval bunkers and were under the impression that the Muskö base was abandoned.
To enter the base, the men had to pass a number of warning signs and barriers. Once their presence was detected on the base, a security guard firing warning shots.
The Muskö Naval Base was built in the 1950s and served for decades as Sweden’s maritime base off its east coast. Although the base was moved from Muskö to Karlskrona in 2004, the island is still home to both military and civilian maritime activities.
“There is a civilian dockyard that is a part of Kockums’ operations,” Anders Enström, the head of the marine unit at the Swedish Defence University (Försvarshögskolan), said, referring to a shipyard owned by Swedish defence company Saab Group.
“They build small hulls and engage in ship repair and maintenance, sometimes on behalf of the Swedish Armed Forces,” he added.
According to Enström, the Muskö base also carries out activities on behalf of the maritime intelligence agency Sjöinformationskompaniet and manages communications with Swedish military forces on both land and at sea.
Enström said that it would be difficult to assess whether what happens on Muskö would be of possible interest to foreign nations.
“It’s reasonable to assume that a base that has been around since the 1950s is already well-known. It’s hard to speculate because you quickly enter the realm of conspiracy theories,” he said. “On the other hand, it is hard to understand how the men would have entered the base, passing all of the warning signs and barriers, without realizing that this is a place that they really shouldn’t be.”