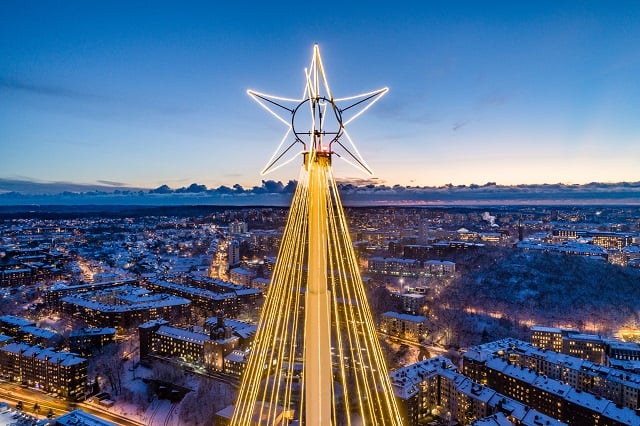 Liseberg theme park is just the starting point for the festive season in Sweden's second city. Photo: Per Pixel Petersson/imagebank.sweden.se

The centrepiece of Gothenburg at Christmas time is the Liseberg theme park, transformed for the season into a winter wonderland with the tree standing tall over the city (pictured above). As well as full festive decor and the country's biggest Christmas market, there are seasonal shows (try to catch the ice ballet if you can!), food and drink and plenty of different themed areas, plus the opportunity to ice-skate.

But there are more markets to explore.

Head to the atmospheric Haga quarter for a Christmas market every weekend until December 22nd, open 10-4pm on Saturdays and 11-4pm on Sundays. There will be musical performances to enjoy alongside the traditional shopping experience, and a wide range of cafes to pause and warm up in over fika.

In the city centre, a small selection of stalls will fill Gustaf Adolfs Torg on weekends between 9-6pm, and at the Nordstan shopping centre the market takes place daily between 10-8pm and little ones can even meet Santa most weekend afternoons.

Kronhuset, one of the city's oldest buildings, also hosts a market every day except Mondays, from 11-6pm. Shop for traditional gifts and handmade crafts as well as taking advantage of a variety of activities – check the website for the full schedule. And a new addition to Gothenburg's array of winter markets is the one specializing in food and design at Lindholmen, taking place on the first three weekends of December.

Further out of the city, Tjolöholm Castle has a Christmas flea market (entrance fee 20 kronor) with secondhand bargains on offer as well as gingerbread and glögg.

Swedish winter may be cold and dark, but that just makes the country's tradition of spectacular light displays all the more magical, so wrap up warm and take a festive walk.

Two of the most spectacularly decked out streets are Kungsportsavenyn and Teatergatan, and in the city centre Kungsgatan is also full of lights. The city's parks are also worth a visit, including Bältespännarparken where you'll find an artificial fireplace and heated seats set up for winter storytelling, and Renströmsparken, where the display set to be inaugurated on December 8th has been specially designed to be interactive on rainy days. Find a map of more of the best light displays here.

A clear evening is a great time to walk round the harbour area, with lights reflected in the water. Photo: Göran Assner/imagebank.sweden.se

If you're looking for something to do with the family, the city Art Museum has a light display where spectators can interact with moving images. And selfie fans need to make a pilgrimage to Gustav Adolfs Torg, where you can take a festive snap in the photo booth and see it projected onto the building's facade. In the same area, on Monday and Friday evenings there are live fire performances for Christmas lights with a twist.

The markets aren't the only place you can stock up on gifts for everyone on your list. A visit to department store NK is a must, to check out the famously festive window displays, which this year are designed around the theme 'a magical Christmas'. Meanwhile, the Saluhallen Food Market is a great spot to pick up edible gifts or simply have a snack while you take a rest from present-buying.

If you're planning to give Sweden's 'Christmas gift of the year', a secondhand item of clothing, head to Linnaeus City where there's a wide range of vintage and secondhand shops including Emmaus Björkå and Myrorna.

And if you want to give a present to someone in need, charity City Mission is accepting gifts for vulnerable men, women and children in the city – you can drop them off at Drottninggatan 33 during normal office hours or at Östra Hamngatan 16 between 5-7pm on December 11th, 14th, or 20th.

Eat, drink and be merry

Swedish Christmas means julbords aplenty, and in Gothenburg there's no shortage of delicious spreads. Note that it's generally a good idea to book ahead, especially on weekends.

If you're looking for luxury, the Tudor-style Tjolöholm Castle four miles south of the city offers a package inspired by Downton Abbey, or try the more central Stora Teatern where prices start from 595 kronor per person, or Lilla Spinneriet for a mix of Swedish and Mediterranean flavours from 625 kronor. Wherever you julbord, consider trying the Swedish specialty of snaps (don't overdo it though). Photo: Fredrik Sandberg/SCANPIX

Hotel Gothia Towers offers a spread with a fantastic 29th floor view over the city, and if you go during lunchtime it's only 295 kronor (with discounts for children).

And for those who have already had one julbord too many, try something a little different with the Boule Bar's French-inspired buffet meal and games, or an archipelago cruise combined with a festive brunch.

Check out a concert

There is no quicker way to get into the festive mood than by attending a traditional advent concert at one of the city's churches. Multiple events will take place at Gothenburg Cathedral, from its Christmas concert featuring choirs and strings on December 15th to a festive singalong on December 18th and 19th to the city's wind orchestra concert, with two performances each on December 20th and 21st,

The Vasakyrkan's Advent Concert is at 3pm on December 8th with choirs, a soloist, and trumpet and piano, while the same church hosts the Gothenburg Youth Choir's Christmas and Lucia concert at 7.30pm on December 13th (with a shorter Luciatåg concert for children starting at 6pm).

As well as church concerts, you can also catch the Gothenburg Academic Chamber Choir's performance on December 9th at the university, while on the same day the Stora Teater hosts a big band Christmas concert with a focus on soul and swing. The Glenn Miller Orchestra's Christmas show is on December 15th.

Busy schedule that doesn't leave time for relaxing at a concert? Don't worry, you can soak up the Christmassy atmosphere while shopping, with a variety of local choirs performing at the central Kungsportsplatsen on weekday evenings and weekend afternoons. The singers stand in the shape of a Christmas tree as has been tradition since 2004.