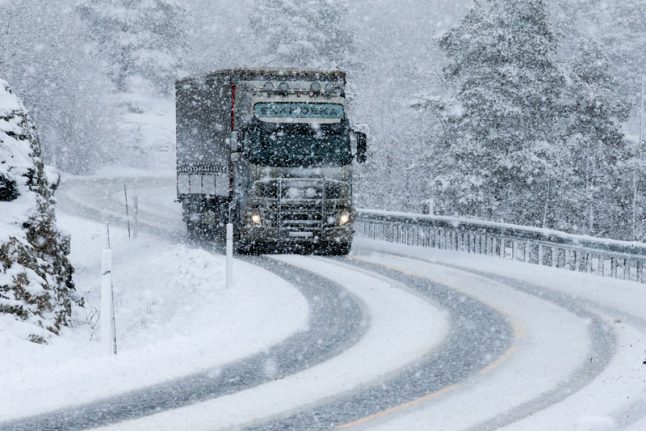 Photo: Terje Pedersen/NTB Scanpix/TT
The overnight hours into Friday produced the season’s coldest temperatures thus far, dropping to -26.3C in Nattavaara in Lappland, according to national weather agency SMHI. Relief is not likely coming soon for Sweden’s northernmost inhabitants.
“There is very cold air there and the snow is helping to keep the temperatures down. It’s not unlikely that there will be similar nighttime temperatures [through the weekend],” meteorologist Henrik Reimer said.
READ ALSO: Here’s how to safely cycle through the Swedish winter
Over the course of the weekend, it will be as if Sweden is in two distinctly different worlds, Reimer said.
“When it comes to northern Svealand and Dalarna, the top of Värmland and large parts of Norrland, you can expect quite a bit of snow. As it looks now, it’s going to snow the entire weekend,” he said.
In central and southern Sweden, residents are in for another round of nasty weather, though they might be thankful that it’s not as cold as up north.
“We have a low pressure system coming in from the southwest that will bring somewhat milder air over Götaland and eastern Svealand. Here, the temperatures will be in the single digits and there will be rain,” Reimer said. “In certain parts of Svealand there can be some instances of snowfall, but mostly rain.”
Whichever side of the weekend’s weather divide you find yourself on, try to enjoy it!
WATCH: Crazy Aussie takes bone-chilling dip in Malmö