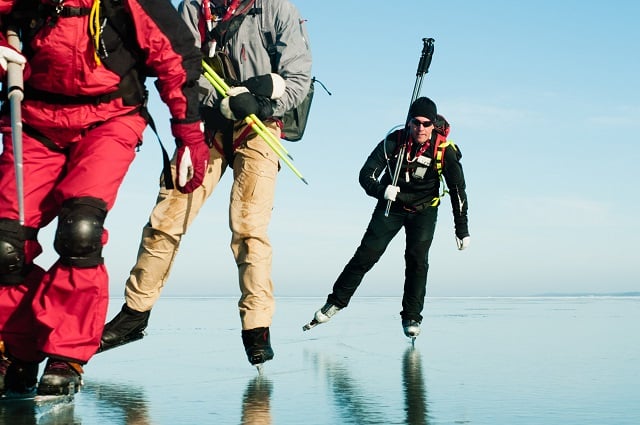 Did you know there are dozens of places you can rent winter sports equipment for free in Sweden? Photo: Helena Wahlman/imagebank.sweden.se

Look at the lights

Nowhere does Christmas light displays quite like Sweden, where town squares and streets light up with all manner of festive delights. In the bigger cities, you can find information and maps to help you follow the lights in Stockholm, Gothenburg, and Malmö.

Even if you're not close to a city centre, it's worth taking a walk through residential areas to admire the mostly matching decor in each window over Christmas.

Compared to the colourful, eclectic displays you might see in the UK and US, for example, Swedish displays tend to be understated with white and gold lights and an advent candle or Christmas star taking centre stage. There's something soothing about seeing the similar shapes lighting up almost every window in an apartment building. As well as or instead of giving gifts to friends and family, you might consider giving a gift to someone in need this Christmas, if you're in a position to do so.

Stadsmission (City Mission) is one of the largest nationwide charities, where you can choose to donate your time or perhaps unwanted items to homeless families and people living in poverty. There are also initiatives such as Jul i Gemenskap across the country, where you can volunteer at Christmas events for people who would otherwise be alone over the holiday season.

Alternatively, if you're clearing closet space in anticipation of new presents, you might want to take any old clothes or other items that are still in usable condition to your local charity shop. This way you aren't only helping the charity itself, but might also be providing someone's Christmas gift: 2018's 'Christmas gift of the year' in Sweden is the secondhand garment, so plenty of Swedes will be doing their present-hunting in the country's charity shops.

Go to a concert

Cathedrals and churches up and down the country host services throughout the Christmas season which can get you in a festive mood whether you're religious or not. After Lucia Day on December 13th, look out for concerts on each Sunday of Advent.

Alternatively, your local university or high school choir or orchestra is likely to be putting on a winter concert, and many of them are free. Some large companies also have staff choirs which have festive concerts, such as Volvo in Eskilstuna.

For more ideas, try the Gratis i Stockholm website for shows in the capital, or look on KorLiv which includes both paid and free concerts. Christmas window displays or julskyltning have become a beloved tradition in Sweden. The undisputed leader of the pack is department store NK, whose windows in Stockholm and Gothenburg light up with moving displays each year and draw crowds from way out of town.

But you'll also see chains and local stores all over the country fill their windows with stars, snowflakes and all manner of decorations. Take time to wander through your local neighbourhood and see how the different shops have dressed themselves up for Christmas. If you're learning Swedish, the children's TV programme Julkalender (Advent calendar), broadcast with daily episodes until Christmas Eve, is a great way to get in the holiday spirit while learning new vocabulary.

And if you prefer to stick to the classic Christmas movies you know and love, keep an eye out for public screenings. In Stockholm, the rooftop bar Sthlm under Stjärnorna is hosting free showings of festive favourites through December and January. You might have seen the permanent exhibitions at your local museums, or never been all that interested, but up and down the country there are different cultural events with a Christmassy feel — and many of them are free.

In Stockholm, check out the impressive gingerbread houses on display at ArkDes; Blekinge Museum has an exhibition showcasing festive traditions old and new; and Umeå's Bildmuseet, which has free entry, hosts its own Christmas market with free entry on December 14th and 15th. If you already have your own skates or skis (try secondhand shops or classifieds sites such as Blocket), look out for squares that have been turned into ice rinks in the country's southern cities, including the Kungsträdgården rink in Stockholm as as less crowded spots outside the centre.

If you're lucky enough to live in part of Sweden where the local lakes have already frozen over, or where the forests over cross-country skiing opportunities, you have even more options (but make sure you always put your safety first).

Some locations offer free skate rental, such as Malmö's Folkets Park, the Behrn arena in Örebro (certain times only), Sundstorget in Helsingborg, and in central Luleå, where you can skate or ski on the frozen sea.

You should also be aware of the fritidsbanken located across the country, which are like a library for sports equipment: you can rent skates, skis, and other items free of charge, often for up to two weeks at a time. Find your nearest one here: they are mainly located in Sweden's smaller towns or in suburbs of the larger cities, but with new locations opening up regularly, there should be one within day trip distance at least.

Are you organizing any events in Sweden in January? Let us know and add it to our what's on guide.