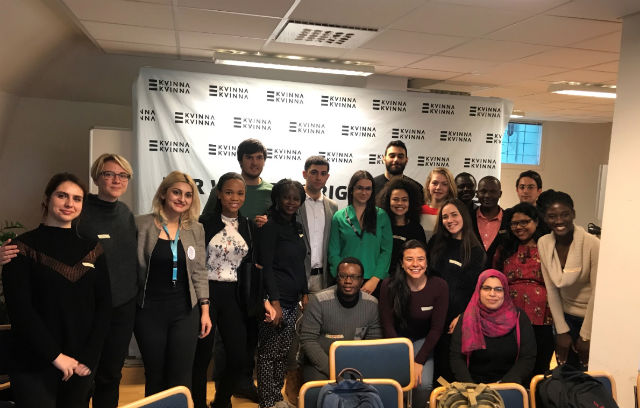 Photo: participants of the Kvinna till Kvinna workshop

I first heard of Kvinna till Kvinna back in 2014 when I attended a 10-day workshop in Berlin, Germany on gender and technology with a focus on online security.  Kvinna till Kvinna is a Swedish foundation promoting women’s rights in more than 20 war and conflict-affected countries.

Attending this workshop guided the next steps of my career as a digital security consultant on women's online security. Four years later as an SI scholar and master student, I visited the Kvinna till Kvinna headquarters in Stockholm for a one-day workshop on women, peace and security. Photo: Yvonne Oluoch (centre) at the Kvinna till Kvinna workshop

The workshop presented an overview of the women, peace and security Resolution 1325 agenda at the UN Security Council from October 2000. For the first time in history, women's issues were included in the peace and security agenda; today, Kvinna till Kvinna works in 20 countries globally to ensure that women's rights are respected, and increase their participation and representation at all levels of decision making.

One quote which resonated with me is an excerpt from the day’s presentation: “Peace is not the absence of war. It is the presence of justice and the absence of fear,” as Dr Ursula Franklin once said.

I got a better understanding of what strides have taken place and still need to take place to achieve global equality.

With such concrete approaches to ensuring the peace and security of women, what is then hindering the progress of these resolutions today?

Some of the existing challenges that I was made aware of by the workshop were the impunity in many countries which hinders justice to crimes on women and the fact that men are still overrepresented – only 7.6 percent of women are negotiators while 97.6 percent of men are signatories which is a clear indicator of the snail-paced progress of women’s participation in peace and security discourse. And it is time to change that.