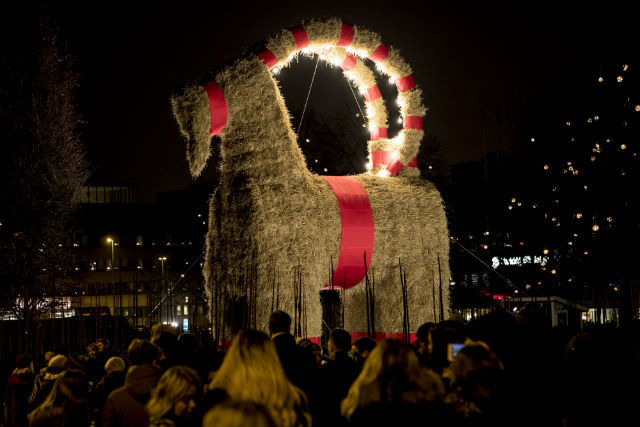 This year's Gävle goat at its inauguration on December 1. Photo: Mats Åstrand/TT
“One person has been arrested,” Pelle Nellberg of the local police told the TT newswire, after “den lilla julbocken”, or “the small goat”, was set on fire on Saturday night. The man who has been seized was discovered close to the goat and will be undergo a police interview on Sunday.
Since it was first put up in 1966, Gävle’s giant straw goat had been burned down in more years than it has survived past Christmas, and its torching regularly makes international news.
READ ALSO: Five weirdest attacks on Gävle's arson-prone Christmas goat
This time Sweden’s fire services arrived quickly enough to put out the blaze, leaving the straw animal with only minor burns to its left front leg.
The main goat, through its own satirical Twitter account, said it was “a little shocked, but glad it wasn't any worse”.

(Ps. Little brother is a little bruised up but okay ?)

The smaller goat is placed away from the main attraction, meaning it is under less thorough surveillance.
In 2016, the goat burned down only hours after it was officially inaugurated, but last year it survived.
READ ALSO: Sweden's Christmas miracle: Gävle goat survives
In addition to the Twitter account, this year the goat had a tribute song written for it from by local Gävle rockers The Refreshments.