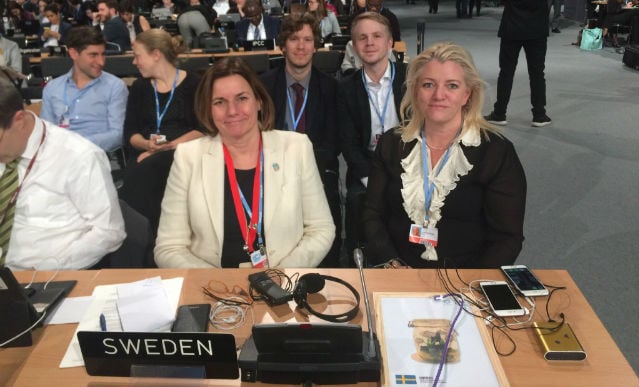 Swedish climate minister together with Johanna Lissinger, Sweden’s chief negotiator, and her team. Photo: Isabella Lövin/Twitter
Nearly 200 countries late on Saturday agreed to a set of rules for implementing the 2015 Paris Agreement on climate change, meaning it can become operational in 2020.
The agreement came after last-minute disagreements nearly saw the negotiations break down, forcing negotiators to extend talks for a day to overcome the impasse.
In a series of tweets on Sunday, Lövin praised the Swedish delegation at the two weeks of talks, for the work they had put in.
She said that Johanna Lissinger, Sweden’s chief negotiator, and her team had carried out “incomparably great and dedicated work 24-hours a day” in recent weeks to help iron out disagreements over the rulebook. “A major achievement for the world, for real!”
Michal Kurtyka, the Polish president of the talks told delegates on Saturday night, that they should congratulate themselves for reaching a deal.
“It is not easy to find agreement on a deal so specific and technical. Through this package you have made a thousand little steps forward together. You can feel proud.”
The agreements left some of the trickiest questions, such as the treatment of emissions credits, and how developing countries should be compensated for climate change, for future meetings.
Lövin, together with Costa Rica's environment minister was given one of the most daunting tasks of the meeting, breaking the deadlock between nations over how to treat a report from the IPCC, the international body that oversees the science of climate change.
In the end the deal reached a “compromise” statement which welcomed the publication of the alarming report but stopped short of welcoming its findings.
Environmental groups complained that it fell far short of what was needed to keep climate change within safe limits, with Friends of the Earth calling the result  “a kick in the teeth for #ClimateJustice” which did not provide “a pathway to keeping global temperature rise below 1.5C”.
“Rich countries have not strengthened emissions cuts or agreed to provide sufficient climate finance for developing countries,” the international campaign group said in a statement on its Facebook page.
Speaking to Swedish broadcaster SVT late on Saturday, Lövin regretted that that there had been “a lot of suspicion” at the talks, but said she was pleased with the end result.
“We should all probably be extremely pleased that we have a rulebook in place which means we can follow up how much countries reduce their emissions,” she said.
READ ALSO: Sweden leads in EU climate ranking
Johan Rockström, the Swedish scientist who heads the Potsdam Institute for Climate Impact Research, welcomed the deal, however.
“The most important conclusion is that it’s a great relief that Katowice has managed to produce a detailed rulebook which will make the Paris Agreement possible,” he told Swedens' TT newswire.
“There’s been a lot of anxiety over divisions between countries, giving growing nationalism and populism, and the situation in Brazil, the USA and the weakened EU. You should have a lot of respect for the challenges that brings.”
Karin Lexén, Secretary General of the Swedish Society for Nature Conservation, Sweden's oldest environmental group, was both pleased and disappointed by the result.
“It’s good that there’s been a start, that the rulebook is in place,” she said. “But it needs to be improved and tightened in the future. We are disappointed that there wasn’t tighter language on tightening national ambitions by 2020.”