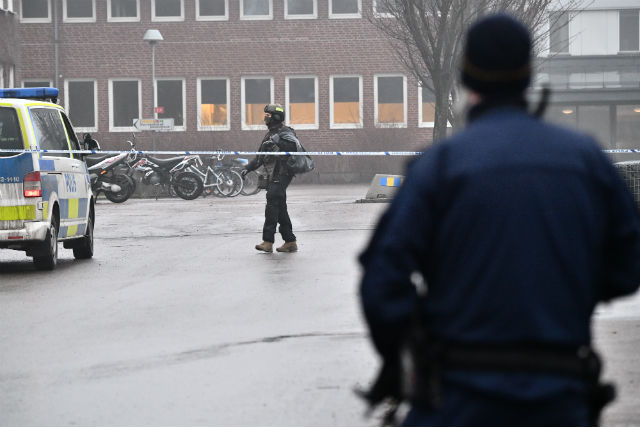 Police cordoned off much of the school. Photo: Johan Nilsson/TT
“We are classing this incident as an isolated event,” said local police chief Pär Cederholm at a press conference. “We have also judged that it is not a terrorist offence.”
No one was injured in the blast at the city's second largest secondary school, but the building was evacuated. It remained cordoned off on Thursday afternoon as a bomb squad and police officers continued work at the scene.
Police launched a major operation, with bomb technicians, a dog patrol, and armed police, and one man in his 20s was detained, initially suspected of terror crimes.

A local police spokesperson explained to The Local why they were initially put on such high alert.
“We couldn't say immediately that it was not a terrorist crime and therefore we had to raise the initial level. That gave us all the methods and resources that we needed to investigate further, and during the day we have come to the conclusion that it was not a terrorist crime,” police press spokesperson Anna Göransson said.

She added that it was standard procedure to start from the assumption that it could be the most serious possible crime, explaining: “It's difficult to raise the level when we have already begun the investigation but it's easier to take it down, so it's routine to do it like this.”

The man is now suspected of aggravated devastation endangering the public, and on Thursday afternoon the address where he is registered was cordoned off as police carried out multiple searches in connection with the blast.
“We need to have more questioning with the suspect, and we have an address in Hässleholm where we have ongoing investigations,” Göransson told The Local. “There is work continuing, but there are not so many resources working with it now as before.”

She added that police had almost concluded their work at the school, but it was still unclear whether it would reopen on Friday as this will depend on the level of damage and how long the investigations continue.