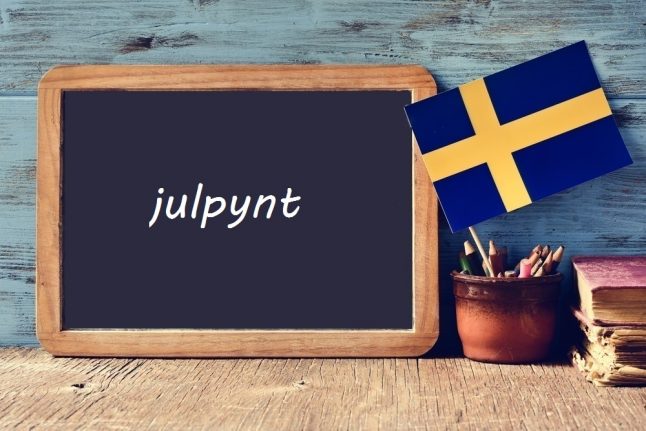 Julpynt is a way to say 'Christmas decorations'.

You probably know that the prefix jul– means 'Christmas', and pynt comes from the verb pynta. Pynta comes from an old Swedish word which meant 'to put in order' (ordna in modern Swedish). Swedes used to use it with a wide range of meanings, including 'to cook', 'to build', 'to prepare', 'to clean' and even 'to dirty', but over the years its meaning grew narrower and narrower.

From the early 19th century, pynta was used to mean 'to decorate/embellish' more specifically, and was used about people (hon pyntade sig – she made herself look nice) and objects. Pynta also has Nordic relatives: in Danish and Norwegian, pynte means 'to embellish' or 'to decorate'.

In Swedish, the term is usually used in relation to Christmas, but the verb pynta is heard much less often than the noun julpynt.

The term juldekorationer also exists as an alternative, but the big grammatical difference between the two is that julpynt is an uncountable noun. That means you can't have två julpynt or många julpynt, you can only have mycket julpynt ('lots of decorations' but literally translating as 'much Christmas decorations').

The children think you can't have too many Christmas decorations!