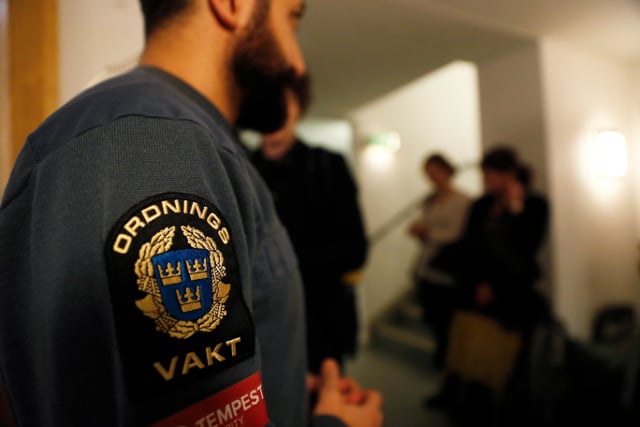 A security guard outside the courtroom in Stockholm. Photo: Nils Petter Nilsson/TT

“If the terrorist crime had been carried out, it could have seriously hurt Sweden,” the prosecution said in its charge sheet.

The first day of the trial focused on the prosecution's claim that the six men sent funds to Isis to finance its terrorism operations.

The prosecution argued that one of the men, 34-year-old Akromion Ergashev of Uzbekistan, sent almost 18,000 kronor ($2,000) to a middleman in Turkey, who in turn sent it to two Isis supporters in Syria.

Ergashev told the court that the chats were misinterpreted, and that the money was actually repayment on a loan he had taken out.

Abdullayev, Idrisson and Umarov are also accused of planning a terror attack in Sweden.

The prosecution believes they acquired large amounts of chemicals to make explosives, as well as gas masks, walkie-talkies and other military materials.

Photographs of crowded locations in Stockholm were found in some of the suspects' phones, suggesting they may have been possible targets, according to the prosecution.

During a police raid in Strömsund, 600 kilometres north of Stockholm, in late April, neighbours told the Dagens Nyheter newspaper they saw police removing about 15 large plastic chemical containers from a shed on an empty property.

One of the suspects is also believed to have been in contact with Rakhmat Akilov, a radicalized Uzbek asylum seeker who mowed down pedestrians in Stockholm with a stolen truck in April 2017, killing five people.

Akilov was sentenced to life in prison in June 2018.

All six reject all of the charges against them.

The trial is taking place in a special high-security Stockholm courtroom, with the defendants sitting behind a bulletproof glass wall.