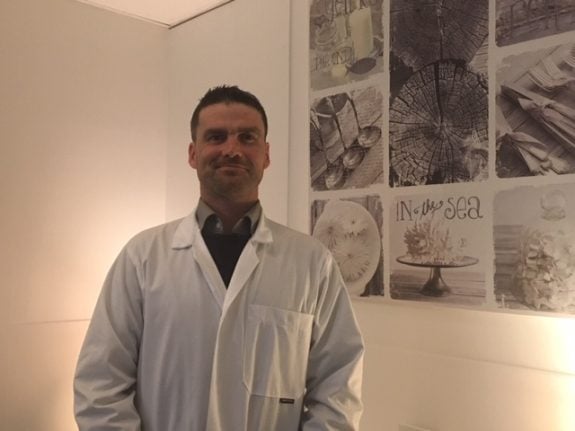 After 15 years working as a therapist, he believes this gut instinct has always served him well, even when it hasn't seemed like it at first. “When you trust your gut, things fall into place eventually. I've had my struggles but I remain true to myself to create the life that I want.”

Phoenix moved to Sweden after marrying his Iranian wife, who is a Swedish citizen and whose parents lived here at the time.

“We wanted to take care of them, plus to try something new and step out of my comfort zone to go on another adventure,” he says.

Originally from Kilkenny in Ireland, he had moved within his home country to work as a professional musician and train as a therapist, as well as spending time studying and working in France and Thailand.

He first branched out into acupuncture after receiving the treatment himself after suffering from tiredness while working as a masseur in a hotel. And he has also trained in life coaching, CBT and NLP, describing himself as “always evolving”.

“The more you learn, the more you earn, not just financially but in self awareness and self respect. I find it empowering to learn new ways to help people and develop myself personally,” the therapist explains.

MY SWEDISH CAREER: Seven inspiring interviews to read in 2019

After several years of job hunting in Sweden and working for other people in clinics, he decided to become self-employed, and in total it took about nine months to set up his business. Now he works at a centre in Stockholm alongside therapists in a variety of fields from beauty therapy to tattoo removal.

“Setting up a business is an education in Sweden: the tax laws, the complications, the stresses as you find out how to go about it,” says Phoenix. “It has been challenging to get through the paperwork but luckily my wife speaks fluent Swedish and helps me out with that. But I'm learning the lingo and the ways!”

“Business comes and goes, I've had moments of serious doubts with the challenges and stresses, but I keep pushing forward and things get better. There's an old saying, the moment you say you've got it, you don't got it, so you have to be ready to adapt.”

During a typical day, Phoenix works mainly with acupuncture, treating problems ranging from back injuries to anxiety, as well as coaching people who want to improve their quality of life. He says that the key to being successful as a coach and therapist is to have plenty of empathy, but not to take on the problems you hear in the clinic.

“If I took on people's burdens, I'd be of no value. There's a big difference between carrying something for someone, which just enables the problem, but you can carry it with them. Otherwise you'll burn out, so there has to be that element of detachment.” In order to reach this balance, Phoenix says he relies on a key philosophy of living “with total integrity”, kindness, and readiness to adapt.

“My aim is to get better every day, and that applies to life as well as work,” he sums up. “As Charles Darwin said, it's not the strongest who survive, it's the ones who are most willing to adapt to change.”

This understanding has served him well in the experience of moving to a country with a new and unfamiliar culture. Like many internationals moving to Sweden, one difference that struck him was the social life, which he describes as “the complete opposite to Ireland”.

“In Ireland you get strangers talking to each other in pubs, on buses, on trains. Here people keep to themselves, often locked in their phones. I accept it as it is, but it doesn't mean I'm going to conform to this way of life. I no longer go out as much as I used to, but I'm still going to stay true to my nature, being sociable, interacting with people, because that's who I am. It's helped me, and every day I see that people are reaching for some form of connection.”

He has also found differences in how people react to his business between the two countries, and in particular the fact that Sweden's heavily subsidized healthcare system can make people more reluctant to pay for private clinics.

“All acupuncturists stick to core principles and there's very little difference because the teachings have been there for nearly 3000 years. What may be different is that Ireland might be a bit more open to acupuncture; in Dublin there's an acupuncturist every 100 metres but Stockholm is a huge city with very few acupuncturists in comparison. It can make it both harder at times and easier at times. In Sweden, paying a private clinic price isn't really in the psyche yet. But that's slowly changing, I think.”

In other ways, the Swedish culture suits him very well, with a relaxed attitude to work-life balance and longer holidays allowing Phoenix plenty of opportunity for relaxing in nature; fishing, walking with his dogs, and spending time in the forests that surround Stockholm.

He also spends time on creative writing, poetry and songwriting. “The problem with a lot of creative people is this archetype of the 'suffering artist' in a big black room with a tiny candle. But creative people are the freest people to express themselves – what gets in the way is judgment, either waiting to get approval from others or being afraid even to put yourself out there,” he says. “You need to put all that aside and realize people may like your work or they may not, but they'll never see it the way you first created it, and that's actually very freeing.”

Looking to the future, Phoenix is working on a course together with a psychologist specializing in mental health issues, and they plan to take it around the world in talks to different companies and communities, particularly targeting children and young adults.

“I see burnout getting worse and worse each year and this is a problem. People think they're stupid or not good enough but also don't know how to say no. Changing this could make a massive difference for young people. We need a radical, collective change.”