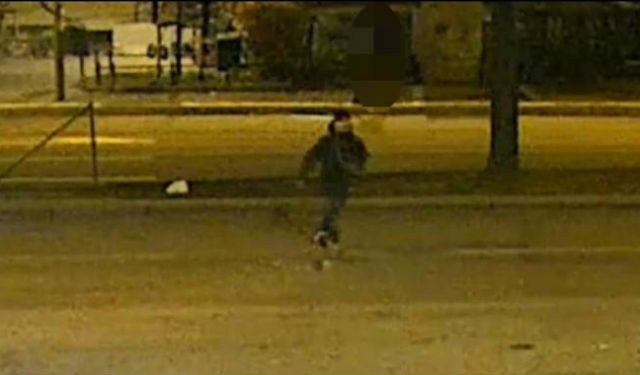 The man was filmed running across Bergsgatan after the attack. Photo: Malmö Police
The rape shocked many in Malmö, as it took place in the open by a small dog recreation area on the corner of Södra Skolgatan.
A week after the attack, police released security camera footage which showed the perpetrator running across Bergsgatan after carrying it out.
READ ALSO: Police release footage of Malmö rape suspect
The 37-year-old was then identified by Malmö police using this security camera footage and witness statements. But before he could be arrested, he fled to Finland at the end of November and sought asylum.
“He is in custody here at the justice centre,” prosecutor Mårten Alvinsson told Sydsvenskan. “When he gets a defence lawyer later today he's going to be interviewed, and before that I don't want to say anything on his response to the suspicions.”
According to the newspaper, the man fled Malmö on the evening of November 29th, hours after police met him at his home in the east of the city to take fingerprints, DNA tests or both.
He was arrested in Finland in December under a Nordic Arrest Warrant, and then returned to Sweden on January 10th.
During the investigation, the man has been linked with a second crime involving sex with a person under the age of 18.
A total of 207 alleged rapes were reported to the police in Malmö in 2017, down from 215 the year before. Of those, 44 took place outdoors, the highest number since 2007 when 48 such attacks were reported.