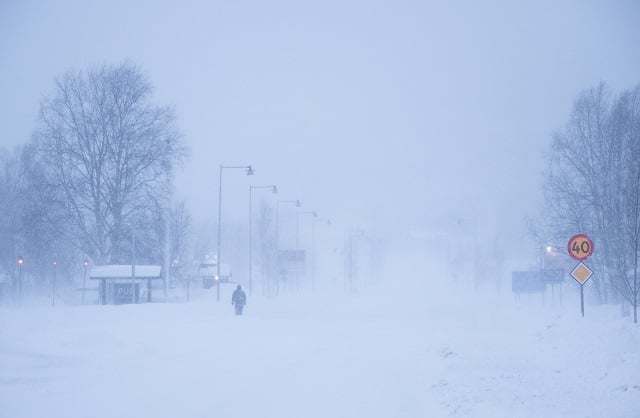 A low pressure area that caused major problems at Stockholm's Arlanda airport was expected to continue to lead to transport disruption in many parts of the country on Thursday morning.

Meteorological agency SMHI warned of heavy snowfall in southern Norrland and the possibility of extremely icy conditions in Götaland.

“We have this low pressure that caused rain yesterday. It's slowly moving towards the east,” said Max Lindberg Stolz at SMHI. “With that, we're getting winds, which means we can get stronger snowfall, with a northeasterly wind that's coming in over the water over Medelpad and Hälsingland.”

Between ten and 20 centimetres fell during Wednesday night in the southern parts of Norrland, and it is set to continue falling, with SMHI issuing a Class 1 weather warning for many areas in the region.

In Götaland, the precipitation fell mostly as rain, and in places where temperatures dropped below zero overnight, this could lead to hazardous icy conditions on the roads. SMHI has warned of such conditions across all of Västra Götaland, and in an area from Stockholm stretching down to Kalmar on the eastern coast.

“We have had a change in temperature on the roads, which means that [rain and snow] can freeze quickly and then it becomes slippery,” said Lindberg Stoltz.

At Stockholm's Arlanda airport, flight traffic had returned more of less to normal by Thursday morning after serious disruptions during the snow on Wednesday afternoon and evening.

“The snowfall contributed to problems for air traffic at Arlanda on Wednesday, when one of the runways was forced to close,” said Åsa Öhman, Swedavia's PR Manager.

On Thursday morning, she commented: “We are back to having two runways operating as usual. We have been working on dealing with the ice all night.”

However, passengers planning to travel to and from Arlanda may experience delays as a result of the flights cancelled the day before. The delay to morning flight traffic was estimated at around 15 minutes on average.

MEMBERS' Q&A: How to dress for the cold weather in Sweden