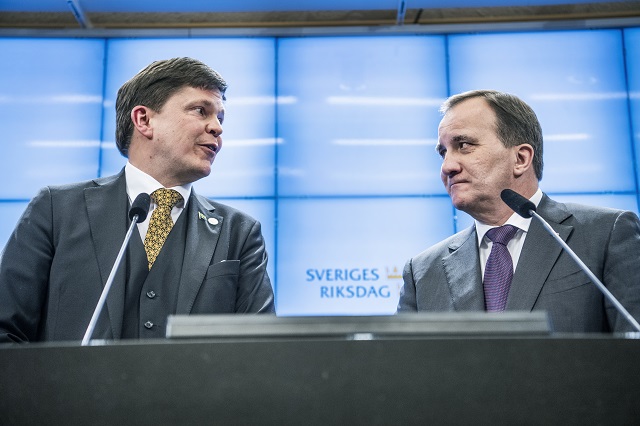 Why did Sweden go 131 days without a government?

On September 9th 2018, Swedes went to the polls, and the result of the election was close.

This meant compromise across the traditional bloc boundaries was needed. The Moderates and Christian Democrats were happy to accept tacit support from the Sweden Democrats in order to govern, but their allies, the Centre and Liberal parties, refused to be part of or support a government that relied on the far-right. But for a long time, they were unable to find enough common ground with the centre-left parties either.

The deadlock was finally broken when the Social Democrats and Greens reached an agreement with the Centre and Liberal parties, who will allow the former two parties to govern in exchange for slightly more right-wing economic policies.

That's the short version, at least. For the long version, including the various twists and turns over the past four months, check the timeline below:

How was the country run in the meantime?

In much the same way as before, but at a slower pace.

Social Democrat leader Stefan Löfven's government lost a no-confidence vote in parliament shortly after the election, but remained in charge during the transition period. A caretaker government has almost exactly the same powers as a regular government, but cannot call a new election or make major partisan decisions.

Er, no. Forming a government has tended to be a quick process in Sweden, thanks to a political system that favours minority governments and coalitions.

In recent years, power has changed hands between two main blocs: the centre-left and the centre-right Alliance, creating something almost resembling a two-party system. But the rise of a third group, the Sweden Democrats, has not only made it tougher for either of the main blocs to reach a majority, but has also caused fractures within the main blocs. In 2018, the Sweden Democrats gained over 17 percent of the vote, leaving the two major blocs without much room to manoeuvre.

Speaker Andreas Norlén called it “an autumn like no other in Swedish politics” and said he had never expected it the route to forming a government to be “this difficult and this long”.

One reason for this is that the parties promised too many incompatible things. The Centre and Liberal parties, for example, went into the election promising that they would not enter into any form of cooperation with the Sweden Democrats, but also that they would unseat Social Democrat leader Stefan Löfven. For a very long time, all of the traditional parties refused to budge on their initial positions, even though this made forming any kind of government impossible.

Norlén tried hard to move the process along, by calling two prime minister votes in an effort to get parties to pick sides. Both Moderate leader Ulf Kristersson and Social Democrat leader Stefan Löfven were voted down by parliament, the first time ever that a prime ministerial candidate has not been accepted. The number of prime ministerial votes that can be held before a mandatory snap election is capped at four, so by holding these votes – and many, many rounds of talks – enough parties were finally able to reach a workable compromise.

IN DEPTH: Sweden in Focus: How did the political situation get to where it is today? What's the deal all about?

The months-long deadlock was finally broken when the Social Democrats and Green Party came to an agreement with two of their former opposition rivals, the Centre and Liberal parties.

This is a 16-page, 73-point document on policy for the coming term, including suggestions from each of the four parties. Given their very different positions on some quite important areas like labour and housing policy, each party has also had to accept the inclusion of points they aren't totally happy with.

A few notable points from the deal include extending Sweden's temporary migration law for another two years, reintroducing a flight tax which was scrapped in the autumn budget, abolishing rent controls on newly built apartments, and introducing language and civics tests as a requirement for Swedish citizenship.

FOR MEMBERS: What does Sweden's government deal mean for internationals in Sweden? What role will the Centre, Liberal and Left parties have over the next four years?

It depends who you ask. Only the Social Democrats and Greens are actually in the government. The Centre and Liberal parties have collaborated with them on the agreement, and abstained in the parliamentary vote on Stefan Löfven rather than directly vote for him (in Sweden, a government only needs to avoid a majority of 'no' votes in order to pass such a vote, so abstentions are sometimes called 'indirect support' or 'tolerating' the government).

Liberal leader Jan Björklund said his party was not a “support party” but would work with the government on some issues and oppose them on others.

As for the Left Party, they weren't included in the deal at all, and leader Jonas Sjöstedt described them as “the left-wing opposition”. But the party agreed to abstain in the vote, after Sjöstedt said earlier that he wasn't prepared to do this. The party's leader also claimed to have agreed with Löfven on a number of areas (not included in the four-party agreement) where his party could have influence over the next four years.

In order for any new policies to pass through parliament, the government requires the votes of all three parties, unless at least one of the parties to the right of the political spectrum would vote in favour. Those are the Moderate Party, Christian Democrats, and Sweden Democrats.

Why are Sweden's centre-right parties so suspicious of the Left Party?

They have very different views. The Left Party is, as you might have guessed, the most left-wing of Sweden's parties, and first started as a splinter group from the Social Democrats that later became the Communist Party of Sweden (and later, the Left Party).

The Moderates and Christian Democrats are further to the right of the political spectrum than the Centre and Liberal parties, so have expressed deep disappointment that the Left Party will have some political influence over the next term. Moderate leader Ulf Kristersson called it “an absurd government formation” while Ebba Busch-Thor of the Christian Democrats said the four-party deal was “an unholy alliance”.

What persuaded the Left Party to allow the deal to go ahead?

The Left Party has a long tradition of working closely with the Social Democrats, including during the last mandate period. As a smaller party, in the election campaign they were clear in stating that their hope was for Löfven to become prime minister.

Sjöstedt held talks with Löfven this week, during which the Social Democrat leader was apparently able to reassure the Left Party leader, who had said earlier that his party could not support the four-party deal.

Sjöstedt also said that he didn't think the alternative to accepting the deal was a snap election, but rather the possibility of a right-wing government, so he has backed Löfven's deal as the lesser of two evils.

One unanswered question is whether there's any formal or written document between the two regarding the influence the Left might have. Sjöstedt hinted said that there was “an internal agreement” between the two parties, but later played this down and said he had just been referring to notes made during their talks.

What's happened to the Sweden Democrats?

In the run-up to September's election, there was a major focus particularly from international media on the far-right Sweden Democrats and their potential role as kingmakers.

In fact, it's been the Centre and Liberal parties, and the Left Party, who have taken on this role (which in Sweden is called being a vågmästare). The centre-left blocs have absolutely refused to cooperate with the Sweden Democrats, and the Centre and Liberal parties have decided that non-cooperation with the Sweden Democrats was a greater priority than unseating Löfven. So even though the Moderates and Christian Democrats were prepared to accept indirect support from the group, they haven't played a major role in the negotiations.

Of course, if you look at it another way, their role has been important. Disagreement over whether and how to work with the Sweden Democrats has fractured the Alliance and contributed to months of deadlock. And the Sweden Democrat focus on issues of migration and national security had a major influence on the Social Democrats' and Moderates' election campaign.

It was possible to cobble together a government without the Sweden Democrats this time, but if they increase their share of the vote in future elections, it may no longer be possible to exclude them

READ ALSO: Just how far-right are the Sweden Democrats?

How stable will this government be?

The Left Party has lent its backing only reluctantly, and Sjöstedt said repeatedly that his party is “prepared to bring down this government” if they go beyond the “clear boundaries” he said he had outlined to Löfven.

In particular, that means that if Löfven puts forward proposals supporting the Centre and Liberals' policies on deregulating the housing and labour market, the government could be in crisis.

Löfven cannot afford to lose the support of any one of the Centre, Liberal, Green or Left parties, so the next four years could be a bit of a balancing act. However, the five parties who have allowed him to govern have all said that they believe this was the most stable solution on the table.