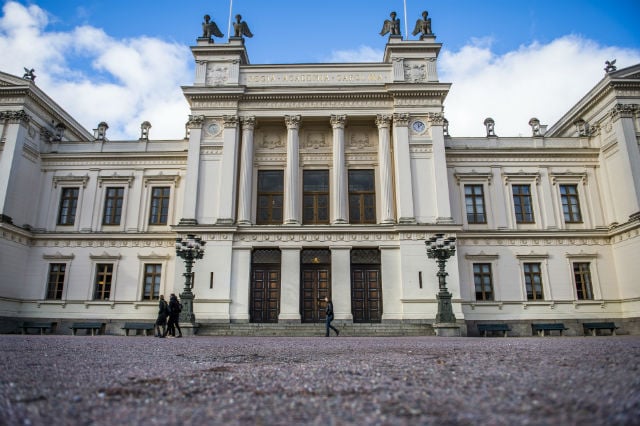 The main university building at Lund. Photo: Emil Langvad/TT
The results come from the Student Baromenter, the first survey carried out into the health, wellbeing and academic conditions across the university since 2000.
“The overall picture is that students at Lund are happy with student life,” Ola Holmström, who led the evaluation project, told The Local. “Nine out of ten report that they are happy being students at Lund University.”
The study found that a full 37 percent of students enrolled at the Joint Faculties of Humanities and Theology spent ten hours a week or less studying alone.
This was despite the relatively few hours of teacher or lecturer-led education at the faculty, with 47 percent of students estimating that they were actively taught for six hours or less a week, and 35 percent of students complaining that the amount of teaching was insufficient.
The study did not include figures for the actual amount of teaching time for students of each faculty.
READ ALSO: Lund professor freed student from Islamic State war zone
The students who spent the most time studying alone were those enrolled at the Faculty of Fine and Performing Arts, 37 percent of whom spent more than 30 hours on independent study.
This was more even than the medics, lawyers, and engineers.
In total, 36 percent of those in Faculty of Law, 35 percent at the Faculty of Engineering, and 27 percent of the Faculty of Medicine spent more than 30 hours a week studying independently, according to their own estimates..
According to the study, many students in the Faculty of Science and Faculty of Engineering said they received eleven hours or more of 'teacher-led education a week', almost double that received by the humanities and social sciences students.
The survey was answered by 6,000 students in December 2017.