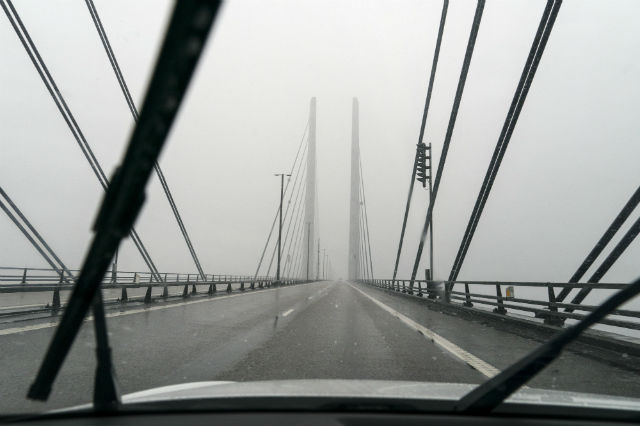 The pylons holding up the bridge are over 200m high. Photo: Johan Nilsson/TT
The bridge was shut just before 1pm on Wednesday and reopened around an hour later.
“We have built-up snow and ice on the pylons and the cables, and the sun is heating it up so it’s melting and falling down on the highway, so for safety reasons we decided to shut the bridge,” Jens Genders, press spokesperson for the bridge, told The Local.
“The pylons are just over 200 metres tall and the bridge is at 50 metres above the water, so that gives you 150 metres of free fall, so it’s potentially quite dangerous.”
The bridge was shut for 45 minutes on Tuesday for the same reason, but the conditions which cause ice to build up on the cables are rare. The last time the bridge was shut due to ice was in 2017, and before that it was in 2011.
The bridge was shut in September when Danish police closed off all traffic routes leaving the island of Zealand as part of a dramatic manhunt.
READ ALSO: Police manhunt shuts connections between Denmark and Sweden
Genders said that the bridge’s operators were currently studying the ice over surveillance cameras, waiting until it was safe to allow traffic to move again.
“In the end, it's up to the sun: how much ice there’s left, and how much it’s being heated up. Right now all we can do is wait,” he said.