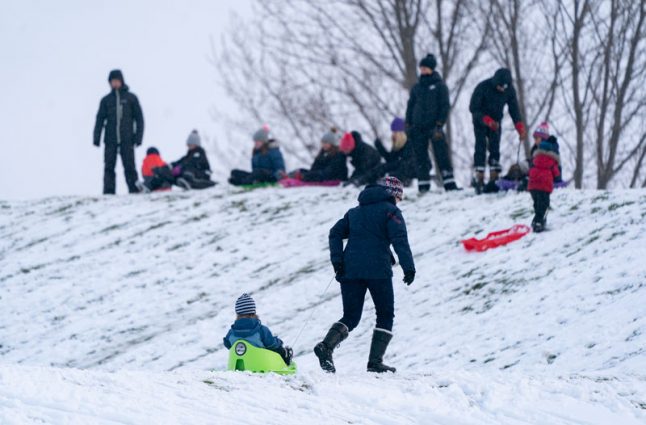 Get your sledges ready for Sunday. Photo: Johan Nilsson/TT
Weather agency SMHI is calling for heavy snowfall throughout the south on Sunday. While that should provide ample opportunity for snowball fights and sledge rides, things will later turn quite messy in Skåne, where the snow is expected to turn to rain on Monday and Tuesday. When that rain then freezes, area streets will be dangerously slippery, SMHI warned.
The southern half of Sweden should see the first significant snowfall already by Saturday evening, meteorologist Henrik Reimer said.
“Snow will move into the south tonight and there could be a few centimetres in southern Götaland, primarily in Skåne,” he said.
But Saturday’s snowfall will be just a preview of what’s expected to come later in the weekend.
“On Sunday, there will be heavy snowfall extending over Svealand and to Dalarna,” Reimer said.
Skåne is expected to get the most snow, but temperatures hovering around the freezing point mean it could just as easily turn to rain. If that’s the case, Reimer said residents should be aware that the streets are likely to be very slippery.
Once the snow starts following on Saturday, it could continue all the way through Tuesday.
In northern Sweden, the weather is expected to be calmer. There will likely be snow but it won’t be nearly as intense as in the south, Reimer said.
With the possible exception of Skåne, the rest of Sweden can count on freezing temperatures throughout the remainder of the weekend.
“In the northernmost area, Sunday will be really cold. In Svealand it will be between two and five degrees below zero throughout the weekend,” Reimer said.