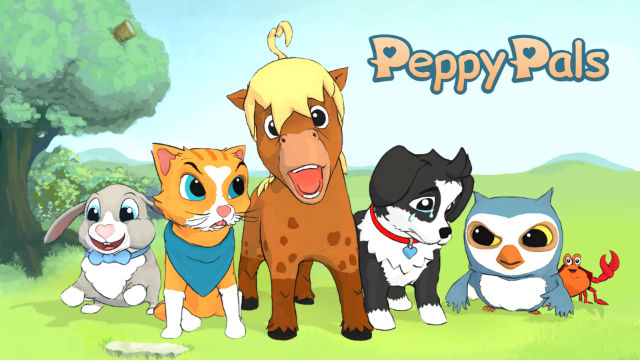 Founded in Stockholm in 2013, Peppy Pals creates playful, digital experiences for lifelong, social and emotional learning. With language-free apps, books, movies, toys and activities, Peppy Pals aims to teach children between the ages of two and eight about Social and Emotional Intelligence through storytelling and humour.

The idea for Peppy Pals started with Rosie Linder, a businesswoman and mother of two.

“Being a parent, she missed a fun way to teach her children about Emotional Intelligence (EQ) – critical skills for their wellbeing and success later on in life,” explains Olsson.

She adds that “she could see the power that games had and thought ‘why can't we use games for something more meaningful than shooting each other or putting makeup on Barbie Dolls?’”

Indeed, a report from the World Economic Forum states that Emotional Intelligence is crucial for the future as it leads to better relationships, success and overall happiness. And skills such as empathy, self-awareness and motivation will be among the most sought-after professional skills in 2020.

With play-based games, Peppy Pals hopes to create a future generation with higher EQ to prevent the ever-so damaging issues of bullying, hatred and exclusion worldwide.

Innovation is crucial for Peppy Pals to remain at the forefront of play-based learning for kids, says Olsson.

“We are the first company in the world to create mobile games on EQ without using text or language, and we have many ideas on how to combine digital and physical play with EQ in the future.”

The innovation process is not always fast paced and exciting – it can be tedious and require plenty of time and research. Thus, Peppy Pals focuses on team effort to drive the change of children’s wellbeing.

“You need to have a passionate team who believe in the vision and the problem you're trying to solve,” she explains.

Five years following its launch, Peppy Pals is still based in Stockholm, which has been named one of the best Edtech cities in the world for its innovative and supportive ecosystem.

“The Swedish start-up ecosystem has been very supportive from day one,” praises Olsson, adding that “we've participated in several accelerators, had great mentors and received grants from a few different initiatives both tech-related as well as for social entrepreneurs.”

The groundbreaking spirit of the Stockholm startup scene has been an invaluable resource for Peppy Pals’ growth and success.

“My advice to all entrepreneurs is to be curious and go to all sorts of start-up events to meet new people. You also have to have a mentality to ‘pay it forward’ – if you give, you'll get,” she concludes.