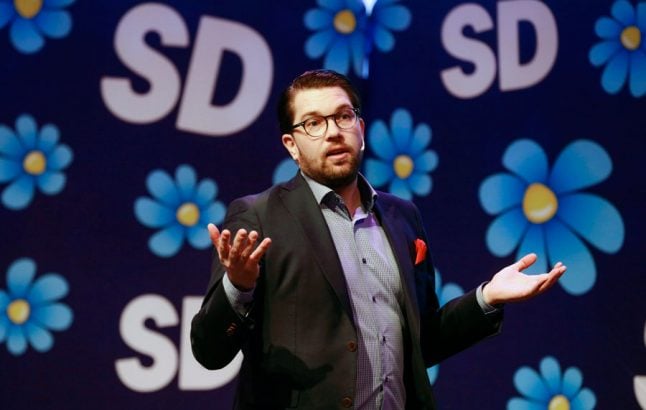 SD party leader Jimmie Åkesson. Photo: Per Groth/TT
Åkesson has long railed against “bureaucrats in Brussels” and as recently as the run-up to the September elections gave his full-throated endorsement of a “Swexit” referendum on Sweden's EU membership.
“The EU is not the way to cooperate in Europe,” he told radio channel P1 in August. “My position is that we should renegotiate the terms [of our membership] of the EU and then the people should have its say.”
The following month, a Sweden Democrats (SD) representative told The Local that “we want the Swedish people to vote on (Sweden's) EU membership.”
But on Thursday, Åkesson published an op-ed in Aftonbladet in which he said that he now believes the best way to reform the EU is from within.
“Cooperation is needed to achieve results, and it is through collaboration that opportunities for reforming the EU from the inside are improved,” he wrote, adding that the Sweden Democrats are now a part of the European Conservatives and Reformists (ECR) group within the European Parliament and that it has established good relationships with its “Nordic friends in the Danish People's Party and the True Finns”.
Although he did not rule out once again pushing for a 'Swexit' referendum “in the long term” if his “vision” of a reformed and less “supranational” EU didn't work out, he said it was simply false that his party is blindly Eurosceptic.
“When other parties tried to portray the Sweden Democrats as a protectionist and closed party, it is a false image only intended to distort and smear the Sweden Democrats. We see the benefits, not only the disadvantages, of today's EU cooperation,” he wrote.
Åkesson added that he now believes it is important to “be pragmatic and fully utilize the opportunities that exist” within the EU framework. He said he would present his new EU strategy to the Sweden Democrats at a meeting next week.
This u-turn comes from a party that once supported leaving the EU so badly that in the months after the Brexit vote, anyone who called their switchboard was treated to a rendition of Rule Britannia as the hold music.
There is now no major Swedish political party pushing for a referendum on leaving the European Union. The Left Party is opposed to EU membership in principle, but said ahead of the September election that it is “not working actively for an exit”.
Several polls in recent years suggest that the majority of Swedes are still in favour of EU membership – in fact, support for the EU in the Nordic nation has even surged in the wake of Brexit turmoil in the UK. In an October Eurobarometer poll, a total of 77 percent of Swedish respondents said that EU membership is a good thing, Sweden's highest recorded level since 2007, according to the survey. Only seven percent said it was a bad thing and 16 percent described it as “neither good nor bad”.