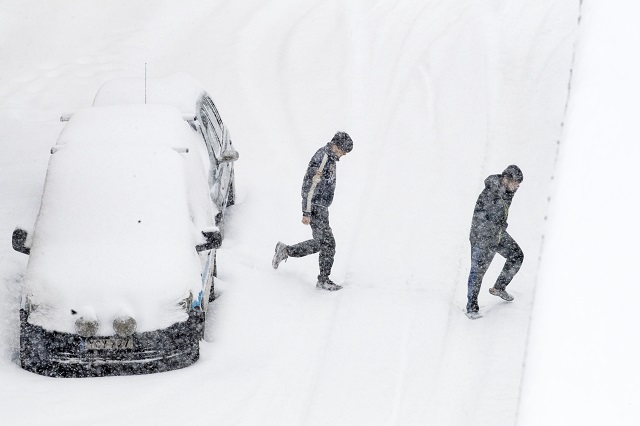 The Swedish Transport Administration said it was working intensively to clear railways and roads before the Monday morning commute began, but trains and even flights were still affected by delays caused by snow over the weekend.

“In the Stockholm area, we are working feverishly to get the snow out of the way around railway tracks, and we think it's going to work. There may be slight delays, particularly around Uppsala and Gävle where a lot of snow has fallen,” explained Yasmine Boulechfar from the Transport Administration's press office at 3am on Monday.

There were no major disruptions for road traffic on Monday morning, according to the Transport Administration, but Stockholm's commuter trains (pendeltåg) were affected by delays and disruptions, while staff shortages may also lead to delays elsewhere in the country.

Around 100 scheduled flight departures were cancelled over the weekend, and by Monday some of the affected passengers had still not been able to leave. Swedavia, which operates all airports in Sweden, was unable to say how many people were affected, but confirmed that on Monday no weather-related disruption to air travel was expected.

Meanwhile, more of the white stuff is forecast to fall later in the day, mostly over western Sweden. This snowfall is not expected to be intense as it was over the weekend, when the cold snap caused major disruption including public transport cancellations and power outages.

A new Class 1 weather warning (the least severe category on a three-point scale) was issued for Halland, Sjuhärad and Bohuslän on Monday due to a new low-pressure front moving over Sweden from the west.

Commuters and other travellers in the west of the country should also be prepared for possible transport delays, Boulechfar warned.

“In Gothenburg, we're working hard to make sure everything's in order, but some trains coming from the north have been delayed there. We haven't had any indications that trains will be cancelled, but train companies might have staff shortages,” she explained.

The snow is expected to start falling across the west coast and surrounding area from the afternoon onwards.

“It's going to be most intense during the afternoon and evening,” said Lovisa Andersson at the national weather agency SMHI. “It isn't as extensive as at the weekend, but at the same time it's mild air which is causing the pressure, so the snow may be heavy.”

This is because larger amounts of precipitation do not always result in thicker snow, since temperature affects whether it falls as dry snow in colder weather or as softer, more closely packed weather in milder temperatures.

MEMBERS' Q&A: How do you dress for the cold weather in Sweden?