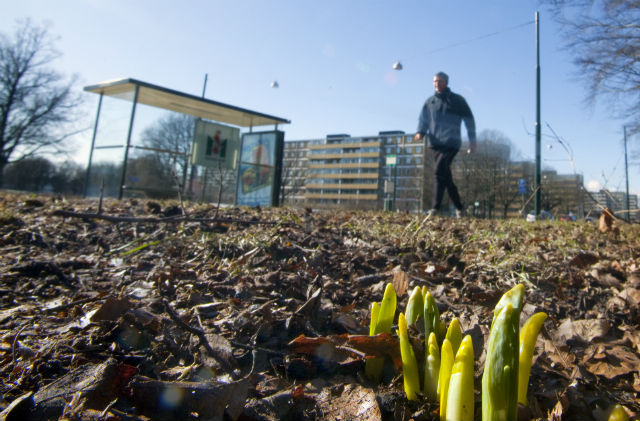 A jogger in Malmö passing the first shoots of spring in an earlier year. Photo: Drago Prvulovic/TT
“On the coasts of Skåne and a little inland, it is still autumn, there’s a small part of southern Gotland as well,” Nitzan Cohen, weather forecaster for Swedish state broadcaster SVT, told told The Local.
“If we get to to February 15th, we cannot have autumn any more, so if there’s a diurnal average temperature above zero for five days, then you will get spring on February 22nd.”
In Sweden, meteorologists mark the start of winter as the day when the average temperature over a 24 hour period has been below freezing for five days in a row.
They mark the start of spring on the first day after February 15th when the average temperature has been above freezing point for seven days in a row.
Cohen said it would be quite unusual for such a large strip of the county to go directly from autumn to spring.
“It is a bit geeky, but it’s fun to follow, especially if you jump from autumn to spring with no gap at all,” he said.
“It doesn’t happen every year, but it’s not very unusual that at least some places along the southern coastline either jump over a season, or get into this undefined zone.”
Last year, many parts of the Skåne coast remained in meteorological autumn until after February 15th, when a cold snap brought them into winter at the last minute.