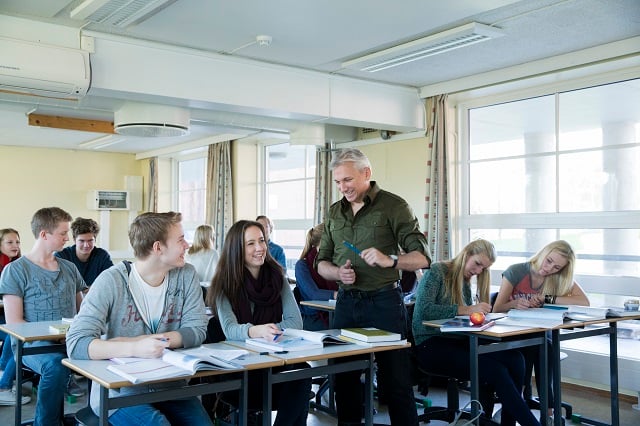 Training as a teacher is likely to ensure you have job security in the future. Photo: Berit Roald/NTB scanpix/TT

In a report released on Thursday, the Swedish Public Employment Service revealed the best professions to work in if you want secure job opportunities in an ever-changing labour market.

The Swedish labour market is forecast to be lacking 100,000 people with the right skills for in-demand jobs by 2024, if current trends continue. It was the first time that the Public Employment Service has quantified the potential future labour shortage, and in particular, the fields of healthcare and teaching will be in need of qualified workers, with teaching positions making up more than half of the predicted 100,000 positions.

Other areas expected to have a shortage of qualified workers are data and IT as well as social care.

Most of the jobs predicted to have the lowest competition require specific qualifications, such as university or vocational education, but the government agency noted that some employers have begun to lower education or experience requirements in order to fill vacancies for in-demand positions.

This could mean that new graduates, as well as recent arrivals from other countries, have an increased chance of finding work in these fields, and is particularly relevant for international professionals whose overseas qualifications may not be officially recognized in Sweden.

READ ALSO: How to impress at a Swedish job interview

“This poses major challenges, not least for the public sector. To cope with the supply of skills, the educational system has a crucial role, but employers also have a responsibility to make the professions more attractive and attract more to education that leads to jobs” said Annelie Almérus, an analyst at the Public Employment Service.

At the other end of the scale, the jobs predicted to have the highest level of competition in 2024 included bank clerks, executive secretaries, estate agents, financial analysts and investment advisers, and photographers. Also on the list were several creative and media jobs, such as graphic designers, communication professionals and PR specialists, journalists, and musicians and composers.

The report was based on interviews with over 14,000 interviews with employers in both the public and private sectors, and 20 of the most future-proof jobs according to its findings are listed below.

The ten most future-proof jobs with no higher education needed