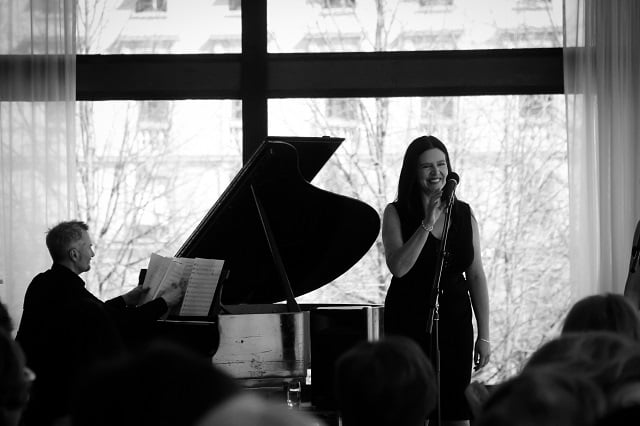 Kimberley Akester has been singing for most of her life. Photo: Kim Kingsboro

The singer moved to Stockholm around 18 years ago, and since then her career has taken her around the world, always revolving around her love of singing.

“I do a lot of different things, but in my heart of hearts I'm a singer first and foremost,” she explains. “Singing brings people together and can change the world, I think, in a positive way.”

Music has determined the path of Akester's own life since she went to the prestigious Chetham's School of Music in Manchester as a boarding student, where she made friends from around the world and first began to consider singing as a serious career option.

“I think that going to boarding school at the age of 14 meant I've always had an adventurous side. I've never had a problem with travel or meeting new people, but I didn't have a clue about Sweden before I came here,” the singer says.

That decision came after she was offered a backing singer role in a three-week run of the musical Fame in Sweden. During the tour, she got to know the Swedish band members and ended up in a relationship with one of them, which, after several years of long-distance, led her to move to Stockholm in 2001.

“When I first came to Sweden, I only knew my partner at the time and he didn't know many people in the international community. I spent the first few months just wandering around the city thinking 'this is weird!'” Akester laughs. “But there's something about this place, you just meet people all the time and everyone's so friendly.”

“Swedish people are very musical too; there's a huge pop music industry here and lots of producers, and generally people here just like to sing. In the early '90s, my a capella group the Swingle Singers came here and we did some coaching for choirs. It was amazing, the standard was so high.”

After making the permanent move to Stockholm, she found part-time work by contacting Stockholm International School and offering to teach singing and organize school choirs. Today Akester runs the school's instrumental programme, with 150 students and 12 teachers, and runs four choirs at the school as well as private vocal tuition.

“I love all of it! We have a PTA choir and that's great, we have such a laugh and they're very good, but I also love teaching the kids, it's just a joy,” she explains. “The international environment means you never know who you're going to bump into.”

In the future, she hopes to perform more in Sweden as well, by finding time to prioritize performing with her close harmony girl group 3's Company. “I think I just need to get out there more and promote it more,” she says. “The group is great fun; we're professionals and perform to a high standard, but we're also just great friends and love singing.” Her British background has also proved to be an advantage, since many people want to learn English and it's the usual language for performing. “Sweden has been good to me, and I'm very lucky that being a foreigner hasn't ever counted against me but means I have something unique to offer, and can work in my field,” Akester says.

However, in the early 2000s, she felt that there weren't many opportunities for children to learn to sing and perform in English.

“I thought there was a niche here for theatre and music in English. There was nothing going on so I had this idea to start a theatre school – so I did!” she says.

“It took a while to take off as these things do. I used to make leaflets and spend hours walking around and putting them through peoples' letterboxes, but it really paid off and people did ring up.  Now more people have heard of us, mostly through word of mouth,” she adds. “It brings children from the different international schools together, and some of them don't speak any English but their parents want them to learn and this is a great way to do that. We do dance, singing and acting from age six and put on shows twice a year.”

She says the shows they choose are “adventurous”, and one of the teachers adapts musicals to make them suitable for children, such as Little Shop of Horrors and A Chorus Line. For Akester, one of the most rewarding aspects of the job is seeing the children develop in confidence through the 14-week term. She believes that everyone can benefit from and enjoy being on the stage, and for that reason doesn't hold auditions.

“The other side of it is that you get these kids who often don't know each other, and the most exciting and worthwhile thing to me is the friendships they make. You can see the friendships develop over the years, and I now get messages on Facebook from students from years ago and they say they're still in touch with so-and-so. That feels very precious to me.”

Bringing people together is also a big part of her life outside work. Today many of her friends are involved in her different musical ventures, whether that's through performing with her, helping with scenery, costumes, or refreshments for shows, or simply showing support.

“I just love people and my favourite thing is introducing people to other friends – my friend from Swedish class got a really good job through someone I introduced him to at a party, which is great!” she adds.

The theatre school also gave Akester a reason to stay in Stockholm after the relationship that first brought her here ended.

“It was very unusual at that time for someone who was freelance, single, foreign, in a city like Stockholm to stay,” the singer remembers. “Everyone either came here for a permanent job or for marriage or they have kids and stay for them. There was no reason for me to stay, apart from my business, but I felt like I had so much more to do with the theatre school. I wanted to see it grow, and I just loved living here.”

READ ALSO: How to write the perfect Swedish CV and cover letter “I loved the calmness. London's crazy and the thought of going there and starting again made me realize I didn't want to do that. I'm also stubborn and thought 'I'm not leaving just because my relationship didn't work out' – I'd already uprooted myself once.”

Her work does still involve regular trips to London to perform, which Akester says is important in order to remain at the standard she wants to be at professionally. It has also included standout moments such as performing at the British queen's 90th birthday in 2016, and with Abba's Benny and Björn in a Hyde Park show some years before that.

But over 18 years in Sweden, Akester says she has slowly adjusted to the slower paced Scandinavian work mentality.

“When I first came here, the summer holiday came around really quickly and I was shocked that everything just shut down! And very indignant really; a ten-week summer holiday seemed ridiculous, as a freelancer if you don't work you don't get paid. But by the following June, I was completely ready to stop – my whole outlook had changed. Now I love that I can just stop.”

However, she adds: “As a musician, I don't think you ever really get balance. If someone offers me a gig, I just say yes. Christmas shows in the UK always fall directly after the end of term here which has Lucia, end of term concerts, five or six big shows in total and then I'm immediately getting on a plane to London to sing in shows – that's tough but I never say no to it.”

As for what the future holds, Akester isn't sure whether she will remain in Sweden, but says that she is very happy in her adopted country. “I must love it here because I've been here for nearly 18 years and that feels unbelievable!”

Kimberley Akester is performing with her group 3's Company in Stockholm on March 30th. Click here for more details