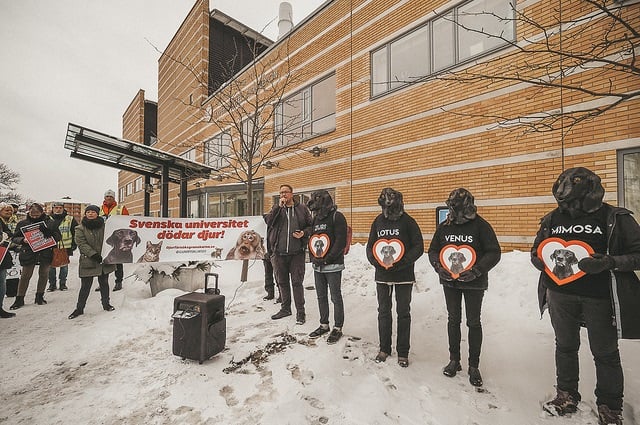 Over 80,000 people signed a petition organized by the Djurrättsalliansen (Animal Rights Alliance) to protest the use of dogs in the research, and the group also organized a demonstration outside Gothenburg University, where the trial is taking place.

The study is investigating how well a new kind of dental implant integrates into human tissue at the university's laboratory for experimental medicine. As part of the trial, six labradors have had a third of their teeth removed and have received the dental implants.

“We have been following this experiment at Gothenburg University for a long time and different versions of it have been going on since the mid '90s,” Daniel Rolke, one of the organization's spokespeople, told The Local after Swedish daily Aftonbladet first reported that the dogs were to be put down despite the protests.

When contacted for comment, a communications officer from Gothenburg University said no representatives of the university were available to speak about its animal testing policy.

However, she referred to a statement from Göran Landberg, Deputy Vice-Chancellor for Research, who said in response to the petition: “It's difficult for us to reach a consensus on these issues, but dialogue is important. As we see it, animal experiments are still needed in some kinds of research, to develop new medicines and treatment methods and gain basic knowledge.”

In Sweden, animal tests can only be carried out with approval from the Swedish Board of Agriculture's Animal Ethics Committee, if the institute organizing the test can prove there is no alternative method.

As well as receiving this approval, Gothenburg University also has its own guidelines around care for animals used in tests, and has said it is committed to using as few animals as possible in tests and ensuring their welfare is monitored by qualified vets. Dogs pictured in Gothenburg University's Laboratory of Experimental Biomedicine. Djurrättsalliansen said the dogs pictured had died but were the same breed and kept in the same area as the dogs they are currently campaigning for. Photo: Götheborgske Spionen

Rolke said Djurrättsalliansen received a huge amount of support in calling for an end to the trial. “In one week, we managed to collect 84,232 signatures on the petition and lots of people are writing to [the university]. Kids have sent in pictures with dogs they drew pleading for the dogs' lives. Hundreds of people have offered to take the dogs in and rehome them and give them a loving home.”

“There will be more protests and we will do anything possible to save the dogs and stop the experiments,” commented Rolke.

Several animal rights campaigners have taken the protest to social media, with thousands of comments criticizing the study shared to Gothenburg University's Facebook page. “This is animal torture,” one person wrote.

“I would rather have no teeth in the future than for you to torture labradors,” another said.

The university has responded to the backlash by saying that it understands the strong emotions and appreciates dialogue on the ethics of testing, but said that these tests were necessary.

“These animal tests are only used where there are no alternatives available today,” the statement said, explaining that the dental implant tests would help patients with dental disease to eat and speak.

The reason why dogs have been selected rather than a different animal is due to the similarity between their saliva and oral bacteria and those of humans.

READ ALSO: Swedish wildlife park to put down all its wolves