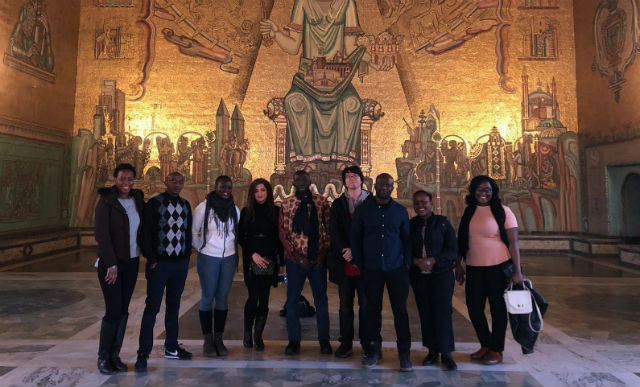 When school officially opened on the 3rd September 2018 at Karolinska Institutet or KI as it is famously referred to, we already knew each other and planned some activities, even before meeting at the SI kick-off event. The first meeting was held in October 2018, and luckily some final year scholars from the previous board attended the meeting. The former chairperson of the committee gave a detailed outline of how they carried out their operations, their decision-making process, the dos and don'ts of the network, and presided over the election for the incoming board.

It was made clear from the start that we are all leaders as required by the scholarship. So, we all collectively agreed to contribute actively and participate in network activities. We drew up an activity plan and responsibilities were shared among all the members of the network.

Our first event was a ‘productive fika’, a networking event with SI scholars not just from KI but also including scholars from Stockholm University and KTH. Decision-making and the organisation of events are usually executed in the same way. The underground work is organised by the person or people assigned to plan the event by continually updating the chairperson on their progress.

The organisers have the freedom to organise the event in the way they think is the best possible.

The treasurers prepare the money required for the event by consulting with the events manager and the person responsible for the event while the vice-chair always takes charge of the registration process.

Different people always come in to help if extra responsibilities need to be taken. The chairperson consults members of the network on the best course of action when a challenge arises, and the majority’s decision always wins.

So far, we have successfully executed three out of the six planned activities. However, our primary challenge is to come up with dates for the events, when everybody is free to attend.

As a network, we have decided to go ahead with planned activities despite not everyone being able to attend. This is because we are all aware of the intense academic environment and schedule.

To conclude, I would like to emphasise that constant communication, engagement and interaction have been vital in our network.